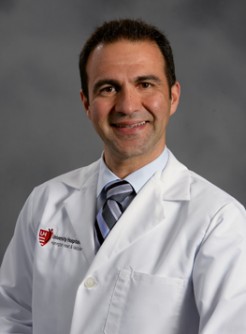 “We are extremely excited to have Dr. Shishehbor as part of our interventional team at UH Cleveland Medical Center,” said Marco Costa, MD, Chief Innovation Officer at UH and President of the UH Harrington Heart & Vascular Institute. “His body of work and expertise in the field of cardiac and advanced vascular interventions are unparalleled in the U.S. His arrival will add depth and breadth to a team of world-renowned experts that have chosen UH as their home. Together we will continue to grow our academic profile and consolidate our regional market leadership to serve our community with the best-in-class heart and vascular care.”

He is an expert on minimally invasive approaches to reconstruct lower extremity arteries in order to treat critical limb ischemia and prevent amputation. His work in this area has been recognized locally, nationally and internationally. Prior to joining UH, Dr. Shishehbor has trained over 40 interventional fellows and over 400 physicians nationally on advanced techniques for limb salvage.

Dr. Shishehbor earned his undergraduate degree in chemistry at Florida International University, Miami, followed by a Doctor of Osteopathy (DO) from Nova Southeastern University in Fort Lauderdale. He completed a master’s degree in public health at Cleveland State University in 2004 and a doctorate in epidemiology at Case Western Reserve University in 2013.

Following completion of his DO degree, Dr. Shishehbor completed a one-year traditional internship at the Palmetto General Hospital in Hialeah, Fla.  He became a clinical fellow in cardiovascular medicine in 2004 and in interventional cardiology in 2007. After completing his interventional cardiology fellowship, Dr. Shishehbor was awarded a sabbatical to train in carotid and aortic endovascular therapy under the mentorship of Bruce Gray, DO, of Greenville, SC, and Michael Bacharach, MD, with the North Central Heart Institute, Sioux Falls, SD.

Pursuing his academic interest in the epidemiology and treatment of cardiovascular disease, Dr. Shishehbor became the first Cleveland Clinic fellow to be awarded the National Institutes of Health KL-2 award.

He is a respected researcher in cardiovascular medicine and has won a number of awards at international and national meetings, including being a research finalist at the American College of Cardiology (ACC) and the American Heart Association Young Investigator Award competitions. In 2008 he was named the winner of the prestigious Thomas J. Linnemeier Spirit of Interventional Cardiology Young Investigator award and in 2009 he was awarded the VIVA/LINC Young Leader's Award in Vascular. Currently, he serves as the Co-Chair of the Peripheral Vascular Disease (PVD) Council for Society for Cardiovascular Angiography and Interventions and as a member of PVD council for the ACC.

Dr. Shishehbor is widely published in leading journals such as the Journal of American Medical Association, New England Journal of Medicine, Journal of the American College of Cardiology and Circulation.

As a leader in critical limb ischemia (CLI) CLI and limb salvage education he served as the chair of the Masters’ Approach to CLI Symposium in 2016. Dr. Shishehbor now serves as a Course Director and Founder of the Cardiovascular Innovations Conference in Denver.

Dr. Shishehbor’s research interests include clinical outcomes in interventional cardiology, carotid and endovascular interventions. He has a special interest in novel minimally invasive percutaneous approaches to treat cardiac, venous, and arterial diseases and has worked with a number of startup companies and early stage devices. He currently has four ongoing prospective studies to evaluate novel perfusion devices in CLI. Additionally, he is currently serving as the national principal investigator for five randomized trials related to vascular disease.

He is board certified in internal medicine, cardiovascular medicine, interventional cardiology, vascular medicine, and endovascular/carotid intervention. Dr. Shishehbor is highly involved in family life with his wife and his two children. He was born in Iran, and his wife is from Colombia. He speaks Persian (Farsi) and conversational Spanish. He enjoys cooking, soccer and Persian poetry.