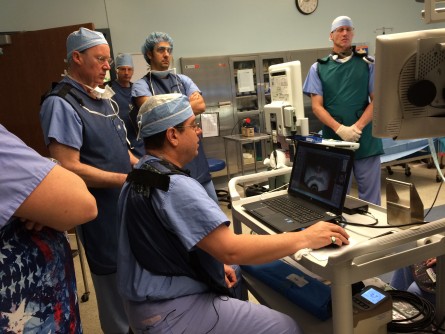 The “OAR” in SpaceOAR stands for “organ at risk.” Despite many advancements in radiation therapy for destroying prostate cancer cells, a common side-effect is damage to the rectum, which is located just below the prostate. Unintended radiation exposure due to their proximity often results in complications including diarrhea, bleeding and pain.

SpaceOAR, developed by Augmenix, Inc., temporarily positions the front portion of the rectum away from the prostate during radiation treatment, creating space for protection. The device uses hydrogel, which is administered in liquid form through a needle and quickly solidifies into a soft gel to separate the two organs. Potential benefits include the utilization of dose escalation (more prostate radiation for improved cancer kill rates) and hypofractionation (fewer radiation treatment sessions), both of which should have substantial patient benefits and help reduce healthcare costs.

“Shielding the rectum from radiation allows us to increase the radiation dose used to kill cancerous cells in the prostate,” said Rodney Ellis, MD, radiation oncologist at UH Seidman Cancer Center. “The SpaceOAR System represents a significant development in advancing the safety, precision and flexibility with which prostate cancer radiotherapy can be delivered. The procedure is performed on an outpatient basis and patients are able to return home and resume their normal activities right away.”

Chardon resident David Reeves, the patient who underwent the April 3 procedure, illustrated the treatment’s success as he hurried back to his small farm that same day to finish boiling 500 gallons of maple sap. “I was so pleased that Dr. Ellis was able to offer me this new technology, enabling me to get back to my daily activities,” said Mr. Reeves. “University Hospitals saved my life a few years ago when I had a heart attack so I knew I could trust in my doctors to be at the forefront of innovation.”

According to the American Cancer Society and the National Cancer Institute, prostate cancer is second only to skin cancer as the most frequently diagnosed cancer in men. An estimated 220,800 new cases and 27,540 deaths are attributed each year to prostate cancer in the United States.

About University HospitalsUniversity Hospitals, the second largest employer in Northeast Ohio with 25,000 employees, serves the needs of patients through an integrated network of 15 hospitals, 29 outpatient health centers and primary care physician offices in 15 counties. At the core of our $3.5 billion health system is University Hospitals Case Medical Center, ranked among America’s 50 best hospitals by U.S. News & World Report in all 12 methodology-ranked specialties. The primary affiliate of Case Western Reserve University School of Medicine, UH Case Medical Center is home to some of the most prestigious clinical and research centers of excellence in the nation, including cancer, pediatrics, women's health, orthopaedics, radiology, neuroscience, cardiology and cardiovascular surgery, digestive health, transplantation and genetics. Its main campus includes UH Rainbow Babies & Children's Hospital, ranked among the top children’s hospitals in the nation; UH MacDonald Women's Hospital, Ohio's only hospital for women; and UH Seidman Cancer Center, part of the NCI-designated Case Comprehensive Cancer Center at Case Western Reserve University. For more information, go to www.uhhospitals.org.