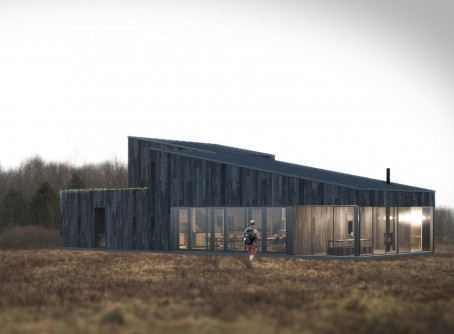 Newswise — Three Oaks, MI – The University of Chicago has completed the Warren Woods Ecological Field Station, the first Passive House-certified laboratory in North America and only the fifth worldwide. Built to Passive House standards — an innovative design process that results in minimal energy requirements for heating and cooling —the field station and accompanying cabins set a new benchmark for sustainable and energy-efficient educational facilities.

The 2,400 square-foot field station is located on 42 acres of land near Warren Woods State Park in Berrien County, Michigan, and is funded and operated by the prestigious Department of Ecology and Evolution at the University of Chicago, which has historical ties to the area.

“Many of our students and faculty perform their research at remote locations, but now, for the first time, we have first-rate facilities close to home,” said Joy Bergelson, PhD, Chair of the Department of Ecology and Evolution at the University of Chicago. “It will be a boon for our research and teaching in modern field sciences. I am excited to finally see the project come to fruition, with an end result that not only sets a new standard for energy efficiency, but is also beautiful.”

Designed and built by architecture firm GO Logic, based in Belfast, Maine, the field station faced several design and construction obstacles not encountered in residential buildings. Ultimately, the innovative design resulted from intense collaboration between architects and scientists to understand the needs of researchers at a satellite University facility.

“We were intrigued by several challenges in this project,” said GO Logic principal Matthew O’Malia. “In addition to the complex technical requirements of the laboratory in a humid environment, the high levels of occupancy by researchers and the high levels of heat generated by scientific research equipment – including plant growth chambers, a -80°C freezer, an incubator and tools for DNA extraction – had to be accounted for in order to achieve Passive House certification.”

Passive House standards strive for extreme energy efficiency and the building had to be positioned on site to maximize energy gain while minimizing loss. To reduce overheating, the laboratory was placed on the comparatively cooler north face of the building. Extensive solar glazing was oriented south for the main seminar space, and perforated steel sliding screen panels used for solar shading were incorporated. Employing a super-insulated building shell and a GO Logic–patented insulated foundation system, the facility is expected to cost approximately $200-300 per year to heat. By comparison, a standard code-compliant building of the same size and layout would cost approximately $3,000 per year to heat. It was awarded Passive House certification by the Passive House Institute in Darmstadt, Germany, in July 2014.

The University of Chicago has close historical ties to field research in the southern Lake Michigan region, most notably by Henry Chandler Cowles and his students. Cowles was a graduate student and then a professor in the department of Botany in the late 19th and early 20th century and often called the father of American ecology. He is most well-known for his 1898 doctoral dissertation on the ecological theory of succession, developed in the dune habitats of northwest Indiana and southwest Michigan. He trained a number of influential scientists and in the later part of his career focused on teaching, when he pioneered experiential learning in the field with hundreds of students in his botany courses. A substantial bequest from the estate of Harriet Cowles Waller, the daughter of Henry Cowles, in addition to funds from the Biological Sciences Division and the University of Chicago, led to the development of the field station.

“The university has certainly embraced energy efficient architecture in recent years, with several LEED designed buildings,” Bergelson said. “With this passive field station, we are excited to push the bar that much farther.”