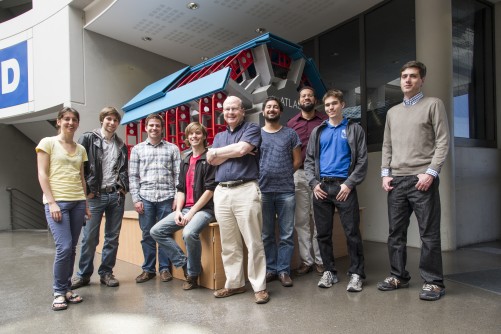 During a recent visit to CERN, James Pilcher, professor in physics (center), posed for this photograph with other members of the UChicago ATLAS Group. They stand in front of a miniature model of the ATLAS detector.

Newswise — The Large Hadron Collider’s two experimental research collaborations at CERN, the European particle physics laboratory in Geneva, will announce the latest results in their search for the Higgs boson at 2 a.m. CDT Wednesday, July 4. University of Chicago physicists will be available to comment on the new findings.

The long-sought Higgs boson is the theoretical particle that endows all elementary particles in the universe with mass.

UChicago physicists play key roles in many aspects of one of the LHC’s two primary Higgs-related experiments, called ATLAS (A Toroidal LHC ApparatuS). A UChicago alumnus serves as scientific spokesman of the other experiment, called CMS (Compact Muon Solenoid). Each experiment is a massive collection of instruments, each built at a different point along the 16.8-mile loop that comprises the LHC. Alumnus Joseph Incandela, BA’81, MS’85, PhD’96, a professor of physics at the University of California, Santa Barbara, serves as scientific spokesman for CMS, making him the first U.S. scientist to serve in that capacity for an LHC experiment. The CMS collaboration encompasses 3,275 physicists, including students, from 179 institutions in 41 countries. The United States provides more scientists for the LHC collaborations than any other single nation. Fermi National Accelerator Laboratory and Argonne National Laboratory, also are LHC collaborating institutions. UChicago and the Universities Research Association manage and operate Fermilab for the U.S. Department of Energy via Fermi Research Alliance LLC. UChicago also is the sole member of UChicago Argonne LLC, which manages Argonne for the DOE.

UChicago physics professor James Pilcher is leading the university’s ATLAS team with five other faculty members. The UChicago involvement with ATLAS began in 1993 with the instrument’s design, the search for funding, and then in its ultimate construction and assembly. Pilcher served as chair of the experiment’s 150-institution collaboration board in 2000 and 2001.

More recently the group has been involved in the search for the Higgs boson decaying into two W bosons, which are charged weak bosons. This work is led by Florencia Canelli, assistant professor in physics, and Melvyn Shochet, the Elaine M. and Samuel D. Kersten Jr. Distinguished Service Professor in Physics.

Two sophisticated pieces of ATLAS hardware, its calorimeter and its trigger, also benefit from the expertise of the UChicago ATLAS Group, which consists of 28 faculty members, postdoctoral scientists, graduate students, software professionals, engineers and staff members.

The calorimeter measures the energies of quarks and gluons that spew from the LHC’s colliding proton beams. The Chicago group built much of the calorimeter electronics and now monitors and improves its performance.

The LHC generates approximately a billion subatomic particle interactions each second, resulting in a data flow far too voluminous for computers to hold. The ATLAS trigger identifies the most interesting interactions to record for later analysis.

Also in the computational arena, UChicago and Indiana University jointly operate the MidWest Tier-2 Center, one of five regional U.S. centers that receives cascading data from the LHC.

Data from the ATLAS experiment flows first to the main computational center at CERN, which then transmits the data to 11 Tier-1 centers worldwide, including Brookhaven National Laboratory on Long Island, NY, and Fermilab in the Chicago suburb of Batavia. Those institutions, in turn, distribute portions of the CERN data to the various Tier-2 centers.

Fermilab, a high-energy physics laboratory, is a member of the CMS collaboration and home to the LHC Remote Operations Center. Fermilab helped design and build the CMS detector as well as equipment for the LHC accelerator. Fermilab scientists are analyzing data taken by the LHC and working on upgrades for both the detector and the accelerator. Argonne, one of the DOE’s largest national laboratories for scientific and engineering research, aims to solve the nation’s most important challenges in energy, the environment and national security. As a member of the ATLAS collaboration, Argonne has made significant contributions to the experiment, especially in the construction and operation of parts of its detector, and in the analysis of the signals that the detector records to reveal the underlying physics of particle collisions.