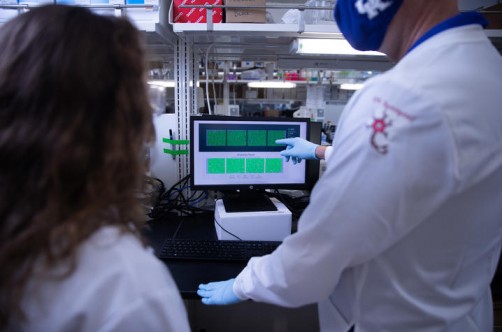 Newswise — LEXINGTON, Ky. (June 29, 2022) — A recent publication from researchers at the University of Kentucky explains the importance of identifying and understanding how differences between tissues and cells alter gene expression without changing the underlying genetic code.

Introductory biology classes teach that DNA is transcribed into RNA, which is then translated into proteins. However, many cellular processes affect how quickly transcription and translation occur. Gene expression looks at the differences in RNA concentrations within a cell, and it can help scientists know which genes are active within that tissue or cell.

Miller, who is also affiliated with the Sanders-Brown Center on Aging and Biomedical Informatics, says he and his colleagues previously developed the first algorithm to identify ramp sequences from a single gene sequence. Through their recent work, Miller and fellow UK co-authors Mark Ebbert, Ph.D., and Matthew Hodgman created an online version of that algorithm and showed that ramp sequences change between tissues and cells without changing the RNA sequence.

A ramp sequence is part of the RNA sequence that slows translation at the beginning of the gene by using codons (sequences of three DNA or RNA nucleotides) that are not easily translated. Ramp sequences counterintuitively increase overall gene expression by evenly spacing the translational machinery and preventing collisions later in translation.

“This research is the first time that variable ramp sequences have been described. Our comprehensive web interface allows other researchers to creatively explore ramp sequences and gene expression,” said Miller.

The research team says this work is important because while there are multiple ways for our RNA to encode the same proteins, the specific RNA sequence is important to regulate protein and RNA levels.

“Essentially, a ramp sequence works like an on-ramp to a freeway so that ribosomes do not crash into each other, but the length and speed limit of that onramp can change depending on the cell and the available resources within that cell,” Miller explained.

He says he enjoyed working on this project not only with his colleagues at UK but as well as his former colleagues at Brigham Young University and his brother, Kyle Miller, at Utah Valley University. Together, the group created a web interface for people to see how ramp sequences correspond with human and COVID-19 gene expression in different tissues and cells.

Miller says he believes this work will eventually impact patient care. “We created an online interface for researchers to query all human genes and see if a specific gene has a ramp sequence in a given tissue and how that gene is expressed within that tissue,” said Miller. “We also show that various COVID-19 genes and human entry factors for COVID-19 have ramp sequences that change between different tissues. Ramp sequences are much more likely to occur in tissues where the virus is known to proliferate.”

So, the researchers believe that COVID-19 genes have genetic biases (ramp sequences) that allow them to use the available cellular machinery to increase their expression. “Our research may help us better predict which tissues and cells new viruses will infect and also provides a potential therapeutic target to regulate tissue-specific gene expression without changing the translated protein,” said Miller.