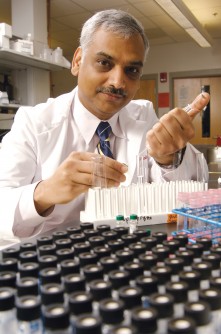 Aruni Bhatnagar, Ph.D., the Smith and Lucille Gibson Chair in Medicine and director of the UofL Diabetes and Obesity Center, is lead author of the statement as published in the journal Circulation Aug. 24.

While much is still unknown about the rapidly growing electronic cigarette industry, e-cigarettes are dangerous because they target young people, can keep people hooked on nicotine, and threaten to “re-normalize” tobacco use, according to the policy statement.

The battery-powered e-cigarettes that contain nicotine are tobacco products and should be subject to all laws that apply to these products, according to recommendations in the policy statement. The association also calls for strong new regulations to prevent access, sales and marketing of e-cigarettes to youth, and for more research into the product’s health impact.

“People need to know that e-cigarettes are unregulated and there are many variables that we don’t know about them,” Bhatnagar said. “Recent studies raise concerns that e-cigarettes may be a gateway to traditional tobacco products for the nation’s youth, and could re-normalize smoking in our society.”

Manufacturers present e-cigarettes as “cool and sexy and acceptable, which is a problem because you’re increasing addiction,” Bhatnagar said. Companies also use terms like “vaping” rather than smoking to gain public acceptance and try to break the connection between e-cigarettes and traditional, “combustible” cigarettes, he added.

In April the Food and Drug Administration proposed rules banning the sale of e-cigarettes to people under the age of 18 and subjecting the $2 billion industry to federal regulation for the first time. Such rules had been long sought by the AHA and other organizations.

The FDA’s proposal fell short of what was hoped for by the AHA and other public health advocates, however, because it did not go far enough in limiting online sales, advertising and flavored products, all tactics used to make e-cigarettes appealing to young people.

Liquid nicotine used by e-cigarettes comes in many flavors like bubble gum, caramel, chocolate, fruit and mint, all attractive to young people, and many brands use colorful, candy-like packaging.

“That’s an unfortunate trend, to make them palatable and attractive to children,” Bhatnagar said.