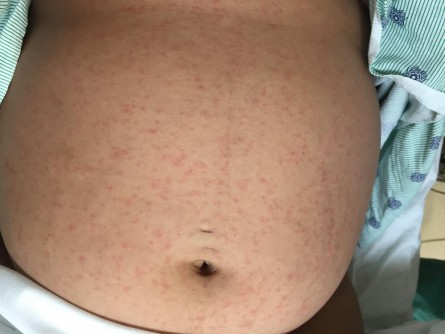 This is a rash on patient's stomach. 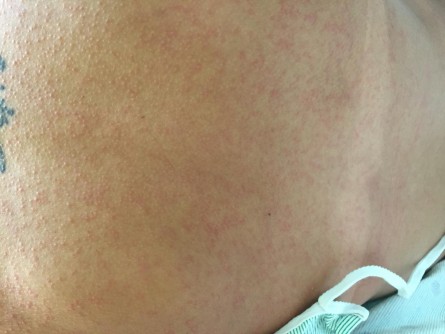 This is a rash on patient's back.

Newswise — Following the recent Zika outbreak in Miami-Dade County, a multidisciplinary team of physicians with the University of Miami Health System and Miller School of Medicine published a case study today in The New England Journal of Medicine, describing in detail the nation's first locally-transmitted case of Zika.

The findings of the case study, titled "Cutaneous Eruption in a U.S. Woman with Locally Acquired Zika Virus Infection," largely center on the skin rash associated with the then-23-year-old pregnant patient's diagnosis and provide a glimpse of the skin manifestations of the Zika virus. The report may have implications for future Zika screening, diagnoses and linkage to care throughout the United States and abroad.

"Dermatologists and clinicians had an idea of what the Zika rash looked like, but it wasn't until the patient presented here that we were able to get an up-close and personal look and photograph the skin," said Lucy Chen, M.D., a Jackson Health System dermatology resident and lead author of the case study. "Any doctor now has a visual sense of the rash to properly diagnose and refer patients to the appropriate specialists."

The young woman whose case is detailed in the report was 23-weeks pregnant in July 2016 and had experienced three days of low-grade fever, a widespread rash and sore throat. The rash consisted of small pink bumps on the patient's chest, back of her arms, legs, palms and soles, said Chen, who saw the patient upon admission. Her symptoms later advanced to muscle and joint pain. The patient tested positive for Zika although neither she nor her partner had traveled outside of the U.S. The case was confirmed by the Miami-Dade County Department of Health as the first non-travel-associated case of Zika in the U.S.

The virus was present in her system for two weeks in urine samples and six weeks in blood samples. Tests, thus far, on the patient's infant show normal development, head size and intracranial anatomy, with no calcifications. The infant, who was born in October 2016, did not test positive for Zika.

Zika virus, a mosquito-borne virus, is transmitted by the Aedes Aegypti mosquito. As Miami-Dade County has the highest number of locally-transmitted and travel-related Zika cases in the U.S., University of Miami physicians at Jackson Memorial Hospital are uniquely positioned to document cases of Zika in adults and children and contribute to the growing knowledge of the virus, which has heavily impacted countries throughout Latin American, the Caribbean and parts of the U.S.

Christine Curry, M.D., Ph.D., who leads the care of Zika-infected pregnant women at the University of Miami and Jackson Health Systems, said the patient is "an example of how the virus can circulate in the body of a pregnant woman for more than the typical one to two weeks." While there isn't enough definitive evidence, Curry, an assistant professor of obstetrics and gynecology at the UM Miller School of Medicine, said some tests suggest that the virus may have a tendency to linger longer in pregnant women.

In addition to Chen and Curry, the case study was co-authored by George W. Elgart, M.D., professor and Vice Chair of Education for the Department of Dermatology and Jackson Health System dermatology resident Farheen Hafeez, M.D.

Chen said people who experience a rash often do not seek care from a provider until it has cleared up. However, as Miami-Dade County is ground zero for the U.S. Zika outbreak, physicians and health workers have been on heightened alert for patients presenting with symptoms associated with Zika.

UM and Jackson have taken a multidisciplinary approach to combating Zika transmissions, caring for patients and studying cases.

Chen and a team in the UM Department of Dermatology took a biopsy of the skin and noted seeing neutrophil cells, which Chen said are not commonly present with viral rashes but help fight infections.

"This is an interesting finding but we would need to study additional cases to determine whether these cells help distinguish Zika rashes from other viral rashes," said Chen.