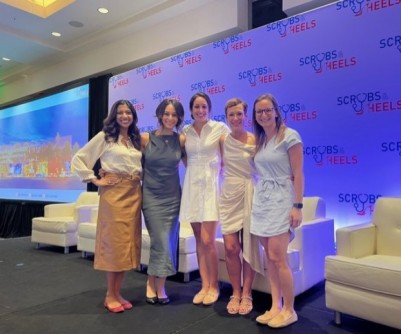 Maria T. Abreu, M.D., professor of medicine and microbiology and immunology and director of UHealth – University of Miami Health System Crohn’s and Colitis Center and 2022 GI fellows at the Scrubs & Heels 2022 Summit. 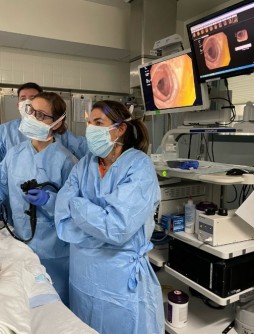 Newswise — The University of Miami Miller School of Medicine Division of Digestive Health and Liver Diseases shines not only for its commitment to patient care and published research, but also as a beacon for advancing the careers of female physicians. The division is celebrating the latter during September, which is the American Medical Association’s National Women in Medicine Month.

The Division of Digestive Health and Liver Diseases has a female gastrointestinal (GI) fellowship director and assistant director; its chief fellows in 2022 are all female; six of the 14 faculty are women; and the director of the Crohn’s and Colitis Center and vice chair of research for the Department of Medicine is poised to assume the presidency of one of the world’s largest professional associations, the American Gastroenterological Association (AGA), in 2024.

Morgan Allyn Sendzischew Shane, M.D., has been working her way up the ranks of the specialty since graduating as a GI fellow from the Miller School. Today, Dr. Shane is assistant clinical professor of the division and program director of the GI Fellowship Program.

“When I was a medical student applying for fellowship, we maybe had one woman per year. In 2020, four out of five of the graduating fellows were women,” Dr. Shane said.  “While the number fluctuates from year to year, our fellows are generally about 50% female, which is really impressive considering that doesn’t reflect the professional practicing landscape.”

According to the latest data (2019) from the Association of American Medical Colleges, less than 20% of active gastroenterologists are female. The percentage of females in all specialties combined is more than 36%. Females make up more than half of all physicians in specialties including pediatric hematology/oncology and obstetrics and gynecology.

Researchers reporting on the GI gender gap in a 2019 paper published in Gastroenterology found that while women comprised 46% of trainees in all specialties combined, only 34.4% of GI fellows were women.

“In 2015, <20% of GI fellowship program directors and <10% of division chiefs were female,” according to the authors.

Things are looking up for women in the specialty. Today, the percentage of female division chiefs in GI is about 17%, according to Maria T. Abreu, M.D., professor of medicine and microbiology and immunology and director of UHealth – University of Miami Health System Crohn’s and Colitis Center.

Paving the way for the future of women in GI

She spoke at the Scrubs & Heels 2022 Summit, a meeting focused on empowering women in GI, about an informal Twitter poll she had taken asking women in the specialty how they envisioned GI’s future.

Knowing what women in GI want is important to the profession and for patient care, according to Dr. Abreu.

“For the gender gap in GI to close, the specialty and employers have to acknowledge that we have to make this a great workplace for women,” Dr. Abreu said. “In particular, I think about things like maternity leave. The average amount of maternity leave that most institutions offer is 12 weeks, and most women physicians don’t even take the full 12 weeks. I think there are things we can do to make this better.”

The specialty is in a good position to start making change, as women are increasingly being elected to key leadership roles, according to Dr. Abreu.

“We’re going to have a woman American Society for Gastrointestinal Endoscopy president, Jennifer A. Christie, M.D., from Emory School of Medicine, in 2023. I’m going to be the AGA president in 2024, and the same year Amy S. Oxentenko, M.D., of the Mayo Clinic in Scottsdale, will be president of the American College of Gastroenterology,” Dr. Abreu said.

Having female role models is important and inspiring to the women who have decided to make GI a career.

“We have tremendous role models at the University of Miami who have shattered the barrier of gender disparity and demonstrated that the present is female,” said Gina Wideroff, M.D., gastroenterology chief fellow at the Miller School. “Within our division, I certainly feel respected and empowered to the same degree as my male colleagues, and I must express my gratitude to the women who have cultivated this sense of equality.”

Dr. Shane said she is encouraged by the opportunities she had early in her career.

“I’ve had a lot of opportunities offered to me to be on different committees, or to represent the division or program in different areas. Being program director is a big position, which is exciting for me,” Dr. Shane said.

But Dr. Shane admits the career trajectory might be different for women than men.

“I think that, for better or for worse, training in medicine happens around the procreating time, biologically. I was able to have two kids during my training,” she said. “My advice to women is that you don’t have to pursue every goal all at once. It’s certainly possible to get everything out of your life and career that you want. Make sure that you have a supportive program where you can rely on your colleagues.

“Right now, my goal is to give our fellows — male and female — an excellent foundation and provide them with resources and connections to pursue their career goals,” Dr. Shane said.