1-Sep-2016 3:05 PM EDT, by University of Minnesota College of Science and Engineering
favorite_border 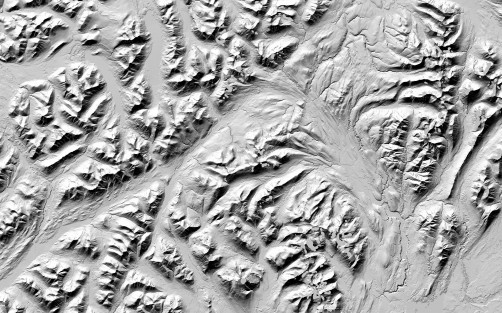 The digital elevation models, or DEMs, serve as a benchmark for measuring future climate changes in the Arctic by assisting scientists studying glaciers, permafrost collapse, and coastal retreat.

Newswise — MINNEAPOLIS/ST. PAUL (09/01/16) — Less than one year after President Barack Obama announced a White House Arctic Initiative that included better mapping of the area, a team of researchers led by the University of Minnesota Polar Geospatial Center released the first-ever publicly available set of high-resolution, three-dimensional topographic maps of the entire state of Alaska.

The digital elevation models, or DEMs, serve as a benchmark for measuring future climate changes in the Arctic by assisting scientists studying glaciers, permafrost collapse, and coastal retreat. All of the information is publicly available online. The DEMs also provide critical new information for ground and air transportation safety, land management, sustainable development, and scientific research.

“With these digital elevation models we can see detailed topography of the land, including individual trees, lakes, roads and buildings,” said Paul Morin, director of the University of Minnesota’s Polar Geospatial Center. “This high-resolution data is invaluable. For example, researchers and land managers can use the data to “digitally rain” on a surface and watch where the rain goes to analyze watersheds.”

The digital elevation models are based on 50-centimeter resolution images captured by DigitalGlobe commercial satellites and licensed by the National Geospatial-Intelligence Agency.

“We used sub-meter optical satellites to collect stereo imagery from space. We broke the Arctic up into 20 trillion two-meter-by-two-meter squares and then used one of the most powerful computers to measure the height of each of those squares,” Morin said. “We are measuring the surface of the Earth at a resolution and geographic scale and spatial resolution that no one has ever done before. It is one of the most exciting things I’ve ever seen in my career.”

This technology is significant in polar mapping because it allows for a wider coverage of the Arctic than did traditional data collection by aircraft, which is limited in the inhospitable and remote polar region. The data can also be collected again in the future to watch ice, permafrost and vegetation change over time.

Teams from NGA and NSF worked with the partners to launch an unclassified, open Arctic portal where the DEMs and emerging information is available to the public. Esri, a geographic information system provider, hosts the site at nga.maps.arcgis.com. The public website hosts webmaps, map viewers, other DEM exploratory tools, nautical charts, sailing directions, and infographics. It also includes a downloadable Pan-Arctic map with mission-specific data layers.

The United States serves as the chair of the Arctic Council through Spring 2017 when the position rotates to Finland for two years. The White House Arctic Initiative supports efforts to understand the Arctic, engage with residents, and develop tools, products and services that improve federal, state and local activities in the Arctic.

Digital elevation models of the entire Arctic are scheduled for release in 2017.About the Polar Geospatial Center

The Polar Geospatial Center at the University of Minnesota is funded through a cooperative agreement with the National Science Foundation to provide geospatial support NSF funded polar science. Through its partnerships with scientists, the National Geospatial-Intelligence Agency, Esri, and the National Center for Supercomputing Applications at University of Illinois, the Polar Geospatial Center coordinates the effort to collect imagery that is transformed into 3-D imagery and linked together to create and disseminate the ArcticDEM to the public.