Donated rig will be housed in former Minnkota Power Plant building in Grand Forks, and joins 10 other hands-on drilling labs at UND 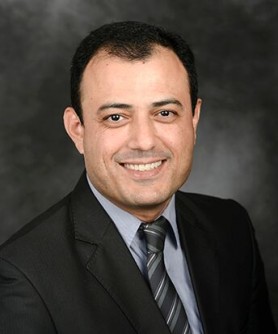 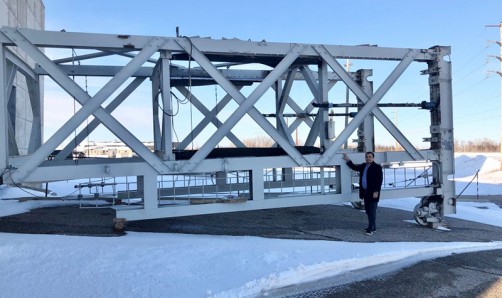 Vamegh Rasouli standing in front of components for the lab in the former Minnkota Power building.

At $40 million, the drilling and completion lab at UND’s Petroleum Engineering department will soon be the sole facility of its size and scope in the world. Vamegh Rasouli, professor of petroleum engineering, stands here next to the lab’s 32-foot tower, which is lying on its side. 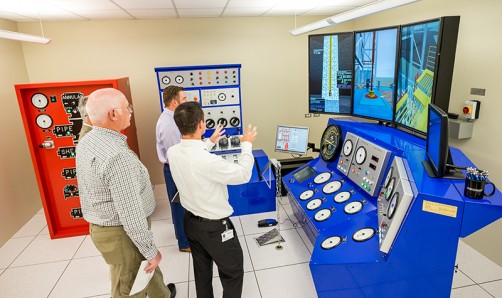 UND’s decade-old petroleum engineering program is the only one in North Dakota, providing crucial academic and hands-on training for both undergraduate and graduate students. Shown here is the Hess Drilling Systems drilling simulator lab.

Newswise — The University of North Dakota will soon host the world’s largest – and only – full scale oil drilling and completion lab.

“This drilling and completion laboratory, when fully completed, will be a $40-million experimental facility that does not exist anywhere else in the world,” said Vamegh Rasouli, Continental Resources Distinguished Professor of Petroleum Engineering and department chair.

“This is the only full-scale rig in the world, and it’s been used by industries worldwide for research,” Rasouli said.

After an agreement is signed, the rig will be housed inside the old Minnkota Power Plant building in Grand Forks, which has the height and space to accommodate the 26-foot-tall derrick. The disassembled rig currently sits in boxes inside the Minnkota building, awaiting crews to make it operational.

Industry and other universities will be welcome to use the lab, Rasouli said, adding that the lab will also allow UND to apply for external research funding.

“For example, if a company wants to validate a bit-drilling mud design to drill in a given formation, we can conduct real, full-scale drilling to confirm the designed rate of penetration,” Rasouli said. “There are so many applications. We can serve students, perform research and help industry.”

The basic equipment was donated by Sidney Green, an entrepreneur, founder/president of Enhanced Production, Inc. in Salt Lake City, Utah, and a research professor at the University of Utah. Rasouli said that when Green retired from Schlumberger, the largest international oilfield services company, he acquired the equipment, which was the former TerraTek Drilling and Completions Laboratory. His intention was to find a new home to reestablish this unique research equipment.

Green said he considered a number of research universities, national laboratories, and international companies, but after visiting with Rasouli, he was convinced that the University of North Dakota was the right location.

“A lot of universities are disappointed they didn’t get this lab,” Rasouli said.

The only problem was transporting it from Utah and finding somewhere large enough to install it.

It cost about $100,000 to move the lab to North Dakota, Rasouli said, and the old Minnkota Power building is one of the few structures with the height to accommodate the derrick.

“UND can do things no one else can,” Rasouli said. “We’re working to simulate horizontal drilling, simulate fluid movement into the rocks and its transportation to the surface. All our labs were built in the last three years, and we’re running out of space.”

“Without the support of the Research Council and the Industrial Commission, as well as the UND Energy & Environmental Research Center, it would be very difficult to continue all our programs,” Rasouli said. “All of this support and encouragement is key.”

“Our mission is to educate hands-on and practical petroleum engineers who can work in the state’s oil and gas industry with a minimum of on-the-job training. We also perform practical research to help industry solve drilling problems, mainly in the Bakken.”

UND has the state’s only petroleum engineering program, which began in 2010 in response to demand for engineers in the Bakken Oil fields. A doctoral program began in 2016 to fill oil and gas research needs. UND’s Energy & Environmental Research Center, which houses the State Energy Research Center, supports many of the petroleum engineering students by offering graduate research assistantships, as well as hiring graduates.

“We produce quality undergraduates, and companies want to hire UND students,” he said, adding that the department has formed an Industry Advisory Council, comprised of more than 25 companies, that comes to campus every semester for two days to help improve the program.

“The oil and gas industry wants to hire people from North Dakota,” Rasouli said. “Our education is hands-on and practical, and we appreciate the assistance from industry. Our problem is that we don’t have enough students to supply the Bakken. If you want to be a practical engineer, UND is the place to go.”