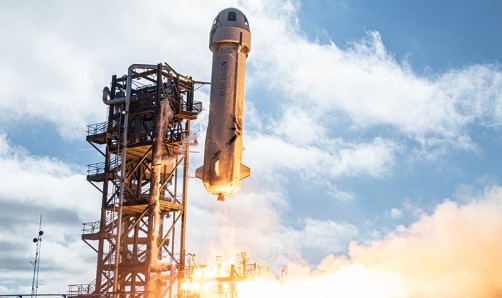 The launch and recovery took place on Wednesday Dec. 11 at the West Texas Launch Site near Van Horn.

“We’ve been working hard and many late-night hours for the past year to bring this dream to reality,” said James Stoffel, a UND Space Studies master’s degree student and co-team lead. “There were so many great learning opportunities, challenges and talented minds from across the country, with the philosophy to #NeverGiveUP and be #DreamersDoers.”

Fellow UND Space Studies Student and Co-team Lead Laura Banken added, “A talented team came together to make this research possible. Together, we were able to address complex scientific questions to learn about life processes in microgravity. This research supports the next steps in manned spaceflight -- to the Moon, Mars and beyond!”

The experiment, titled “Dinoflagellates: A Study of Enzyme Kinetics in Microgravity,” uses bioluminescent algae, called Dinoflagellates, to study the influence of microgravity on biochemical reactions at the cellular level. The knowledge gained from the experiment will complement ongoing research efforts on the effects of microgravity on the human body— specifically skeletal, muscular and cardiac systems, which need to be better understood for long duration manned spaceflight.

The UND payload was part of the 2018 Ken Souza Memorial Student Spaceflight Research Competition, hosted by the American Society for Gravitational and Space Research, which encourages student investigators to develop original research proposals in space life and physical sciences.

UND Space Studies Professor and Director of the Human Spaceflight Laboratory Pablo de León said, “The Dinonauts team has achieved the rare privilege of flying an experiment with Blue Origin. This has been possible thanks to the capacity, enthusiasm and persistence of James Stoffel and Laura Banken, student leads and the entire Dinonauts team.

“Being an educational payload flown by Blue Origin is a source of pride for our department and allows us to plan for other payloads for the near future. Our thanks also go to the Ken Souza Memorial Student Spaceflight Research Competition and to Blue Origin for this amazing opportunity.”

Blue Origin’s New Shepard system is a fully reusable, vertical takeoff and vertical landing space vehicle. New Shepard is capable of carrying hundreds of pounds of payloads or up to six astronauts per flight beyond the Kármán line (100 kilometers high, or 62.1 miles ), the internationally recognized boundary of space.

Blue Origin was established by Amazon CEO and Founder Jeff Bezos with the bold vision of a future where millions of people live and work in space. Reusability is key to realizing this vision. Blue Origin’s record-setting New Shepard was the first fully reusable vertical takeoff and vertical landing space vehicle to fly above the Kármán line five times and land safely back on Earth.

With last Wednesday’s rocket flight a success, the Dinonauts Team is looking forward to the next opportunity to expand its research and knowledge on future long-duration space flights.

“The research we’re doing off the Earth will also benefit our world on Earth and beyond,” Stoffel said.

For further inquiries, please contact the Team at [email protected]