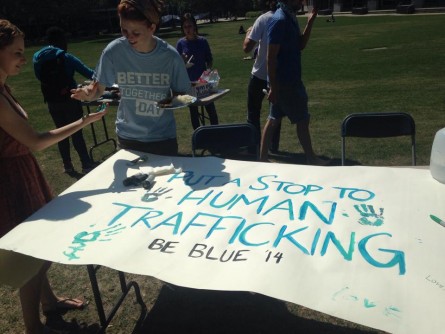 Better Together @ UNF participates in the Interfaith Youth Core's "Be Blue Day" on the UNF campus by bringing awareness to human trafficking. 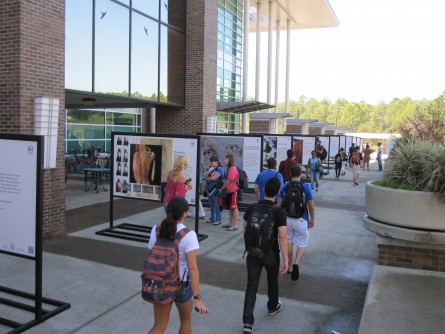 "Artworks for Freedom" panel display on the University of North Florida campus.

Newswise — The current interfaith movement is spearheaded by college students on campuses all across the country, and the University of North Florida is leading the way. UNF’s Interfaith Center is the only public university and the only Florida university to win a national Interfaith Youth Core Award for its “Better Together @ UNF” campaign that raised awareness to the growing issue of human trafficking.

Of the 162 competing schools across the country, only six were named winners by the Interfaith Youth Core, an organization that works with institutions of higher learning to build interfaith cooperation by committing to religious diversity on an institution-wide basis.

Student leaders in the UNF Interfaith Center were recently recognized for its “Better Together @ UNF” campaign, a national movement across college campuses in which people organize across lines of religious/non-religious difference to make an impact on some of the most important issues. The purpose is to show that various religious and philosophical backgrounds can be a bridge of cooperation and that the world can be made better together.

“Students at UNF are making a substantial contribution to the national student-led interfaith movement and are making meaningful change in Northeast Florida through interfaith community service,” said Dr. Tarah Trueblood, UNF Interfaith Center director. “We could not be more proud of their achievements. Recognition by Interfaith Youth Core is well deserved.”

During the 2013-14 academic year, Better Together @ UNF, formed two years ago, focused its interfaith community service on raising awareness around human trafficking, forms of modern-day slavery. Florida ranks third in the nation in terms of the number of reported trafficking cases.

UNF students organized informational sessions with local law enforcement officers to educate students on how to protect themselves from falling victim to traffickers and volunteered for Rethreaded, a Jacksonville nonprofit that supports women who have survived trafficking by the sex trade industry.

Students also partnered with Freed Firm to bring Benjamin Skinner, an award-winning author and journalist specializing in modern-day slavery, to campus for a lecture. Additionally, Better Together @ UNF organized a series of documentary films on human trafficking and a compelling outdoor art exhibit by Kay Chernush, titled “Bought & Sold: Voices of Human Trafficking.”

In total, the campaign reached thousands of people on campus, as well as in the community, and showed how interfaith leadership can have an impact on an important issue. It also tied in with President Obama’s call to action in his “Interfaith and Community Service Campus Challenge,” which encourages students and communities across the country to bridge the differences in belief systems and serve the community for the greater good.

During the 2014-15 academic year, Better Together @ UNF will focus its efforts on community service initiatives to learn about and eliminate homelessness in the Northeast Florida area.

The UNF Interfaith Center’s mission is to engage the UNF campus around religious pluralism, support the religious and non-religious identities of students and provide distinctive programs and services for students to voice values, engage with others, act together and lead others to do likewise. 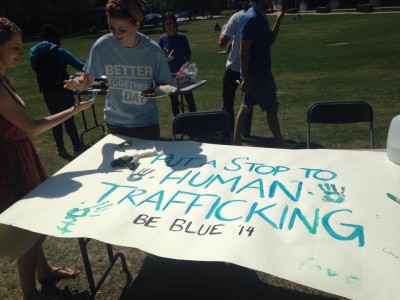 Caption: Better Together @ UNF participates in the Interfaith Youth Core's "Be Blue Day" on the UNF campus by bringing awareness to human trafficking. 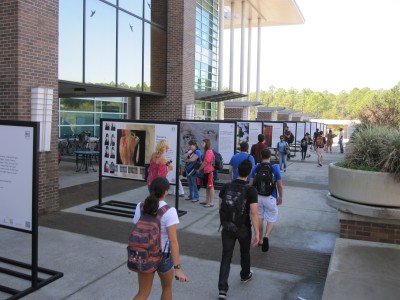 Caption: "Artworks for Freedom" panel display on the University of North Florida campus.