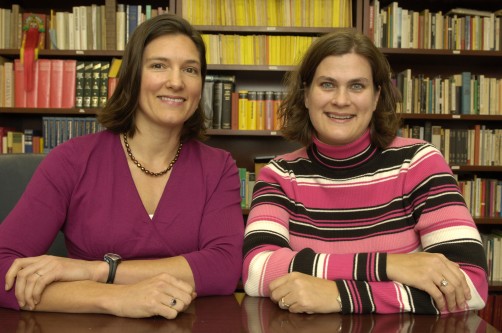 Professors Dr.Lara Ducate and Dr. Lara Lomicka Anderson are using Twitter as a learning aid to inject a little fun and spontaneity into foreign language instruction.

Anderson also has her students use Twitter to converse with native speakers at École des Ponts Paris Tech, a French university, to "keep the conversation going all the time."

"It was a way to let the students find someone who is also teaching their language and learning how to deal with their first semester as a teaching assistant," she said. "They were required to Tweet three times a week on topics like how things were going in their teaching. This gave them a chance to get a little bit more personal attention and also support from more than just me and their USC classmates."

Anderson and Ducate both focus their research on technology in the classroom. They've used discussion questions on Facebook, Skype long-distance chats, and e-mail. They've also worked with podcasting, blogs, and Wikis.

The appeal of Twitter is that it offers a good way for students to get to know one another, the two professors said.

"The students are doing all kinds of interesting communication outside of class," said Anderson, who found that after two semesters, students who had Tweeted with one another were "really well connected and their community was very tight."

She also felt she got to know her students better and was interacting with them more.

Ducate discovered that she could use the subjects of her students' Tweets as a jumping off point for class discussions.

Tweeting is also less intimidating for students who might not be as outgoing as some of their classmates.

"They end up writing more than they would be likely to say in class," she said. "It gives them another outlet where they can express themselves."

Another advantage of Twitter for language instruction is that Tweets are short.

"It's easy for them to write one sentence quickly that doesn't require a lot from a proficiency standpoint," Ducate said. "I think they're more willing to do something like that than having to write a longer blog entry or something that takes more time."

"It's short and it connects them with the outside world and class discussion by bringing in news items and other things they want to share," Anderson said. "Students don't see [Tweets] as homework quite as much because they're fun and allow them to talk about themselves, which they love to do."