University of the Sciences Announces Board and Administration Leadership Changes 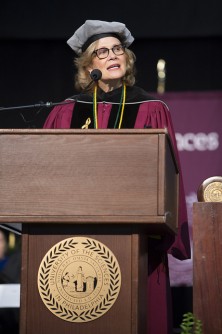 Kathleen Mayes P’76, PharmD’78, vice chair of the board at USciences, has been named interim president of the University, effective July 13, 2015.

Newswise — University of the Sciences board chairman Marvin Samson has announced leadership changes within the USciences board of trustees and the University administration. Samson, who has been serving as interim president since Jan. 1, 2015, will be stepping down from the interim president role and will be replaced by board vice chair Kathleen Mayes P’76, PharmD’78. Replacing Dr. Mayes as vice chair is trustee Ken Murtha, who is currently leading the search for a new USciences president. These changes are effective July 13, 2015.

“I am fully committed to the ongoing success of USciences,” said Samson. “As interim president, I have gained a unique viewpoint and hands-on experience that will continue to serve me well as board chairman. Because Kate Mayes and I have worked together very closely during this transitional period, I know that her assuming the role of interim president will be seamless. She will provide the University with leadership experience as a member of the board, a successful business leader, and an alumna.”

Samson took the interim president position following the departure of Dr. Helen Giles-Gee on Dec. 31, 2014. He has been a dedicated advocate of USciences since joining its board of trustees in 1991, and has served as chairman of USciences’ board of trustees since 2011. He was also the University’s interim president for the 2011-12 academic year. Samson is the founder and CEO of Samson Medical Technologies, L.L.C., a company specializing in injectable drug delivery systems and programs for hospital and alternate site pharmacists.

Dr. Mayes has served on the board of trustees since 2004, starting as alumni representative before being elected to the full board in 2007. She has served as vice chair since 2012. Dr. Mayes founded and was president of Applied Clinical Communications, Inc., of Parsippany, N.J., a pharmaceutical consulting company specializing in medical education, from 1991 to 2000. In January 2000, she sold the company to UnitedHealth Group of Minnesota. A graduate of USciences with a pharmacy degree in 1976 and a doctor of pharmacy in 1978, the University honored Dr. Mayes by naming the University’s Mayes College of Healthcare Business and Policy after her.

“I am looking forward to working with the dedicated faculty and staff in continuing to fulfill USciences’ mission of educating and training our students to be leaders in healthcare professions, healthcare business, and in the sciences,” Dr. Mayes said. “Marvin has provided stability and leadership to USciences, resulting in forward momentum, and I am here to continue to foster that progress while we search for the next president.”

Leading the presidential search is Murtha, who now moves into the role of vice chair of the board. A retired senior vice president from AstraZeneca, Murtha has served on the board since 2004 and is chair of the capital projects subcommittee of the finance committee.

University of the Sciences has prepared students to be leaders and practitioners in the healthcare and science fields for nearly 200 years. Key to its distinctive education is a tradition of hands-on research and experiential learning that is evident in every graduate who has walked its campus. Since its founding in 1821 as Philadelphia College of Pharmacy, the first college of pharmacy in North America, USciences has grown to more than 30 degree-granting programs from bachelor’s through doctoral degrees in the health sciences, bench sciences, and healthcare business and policy fields. Discover how USciences students are proven everywhere they go at usciences.edu.