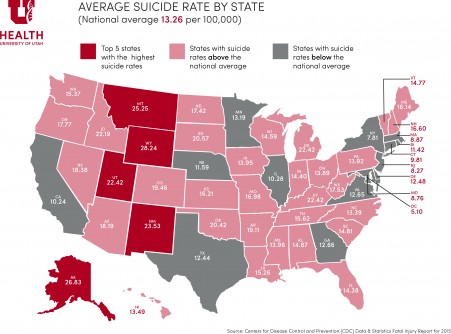 Newswise — Even today, suicide is a taboo topic often discussed in whispers and swept to the shadows of society, despite it being the leading cause of death among youth in Utah and the tenth leading cause of death in the United States. Researchers at the University of Utah Health are collaborating with Janssen Research & Development, LLC (“Janssen”) to shed light on these understudied and tragic deaths. The research will attempt to identify genetic variations associated with an increased risk for suicide.

This collaboration builds on the Utah Suicide Genetics Project, initiated by Hilary Coon, Ph.D., research professor in Psychiatry and principal investigator from U of U Health. Qingqin Li, PhD, Scientific Director and Business Technology Leader, Janssen, serves as co-principal investigator of this collaboration.  The researchers will search for genetic clues within very large extended families that have unusually high rates of suicide.

“We are excited about this partnership,” said Coon. “Janssen has the resources needed to build upon our scientific efforts with the potential of creating new therapies benefiting those suffering from mental illness.”

The Utah Department of Health Office of the Medical Examiner and the University of Utah has implemented numerous measures to protect the identities of suicide victims and their living relatives, creating a clean data set without names, date of birth, or other individual identifiers.

“The University of Utah is uniquely positioned to study the genetics of suicidality,” said Will Dere, MD, Executive Director of the Program in Personalized Health and Co-Director of the Utah Center for Clinical and Translational Science.  “We have a significant collection of samples from people who have died by suicide, along with the extensive information from the Utah Population Database.”

“Suicidal behavior is thought to be a heritable trait and one that has not been sufficiently studied,” said Husseini K. Manji, MD, Global Head, Neuroscience, Janssen. “We look forward to gaining new insights from this collaboration to better understand the intricate relationship between suicidal behavior and psychiatric conditions.”

Janssen will collaborate with the U to characterize DNA from people who died by suicide. The team will jointly mine the genetic and phenotypic data to pinpoint genetic markers for suicide, one aspect of risk in this complex problem.

September is national suicide prevention month, a time to reflect on the more than 44,000 deaths from suicide in the United States annually.

While mental illness and suicide are often intertwined, most people who struggle with mental illness do not die by suicide, which suggests unique suicide genetic risk factors. The identification of the genetic factors may help predict subsets of individuals who are at risk and could inform new strategies for preventing the worst from happening.

The collaboration will enable the researchers to prioritize gene searches to identify important pathways for which medications may already be available, or where new medications may be eventually developed through the Janssen collaboration. Coon believes this approach may open opportunities to try existing or new medications in clinical trials that could help people at greater risk for suicide or to define groups of individuals at specific genetic risk for particular environmental exposures.

“We are excited to have a partner who offers new opportunities for research collaboration,” Coon said. “We believe this work may help us identify high-risk groups for better, more targeted therapies and interventions to reduce the incidence of suicide.” All financial support from the Janssen collaboration to the U will go to fund continued research on suicide risk and to suicide prevention efforts.