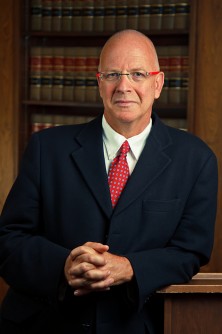 Newswise — (April 2, 2015) —A bomb explodes at the finish line of a marathon packed with spectators. A troop of armed gunmen storm the offices of a political newspaper, intent on stopping the press by shooting a group of political cartoonists. A plane is hijacked, then flown into the ground, killing hundreds of people on board. Terrorists flood a college campus in Kenya, targeting those with different religious beliefs than their own.

All are scenarios from the headlines, but all are also possible scenes that may play out April 10 in a counter-terrorism simulation at the University of Utah’s S.J. Quinney College of Law. Students enrolled in a course taught by professor Amos Guiora will be given a scenario and role play the positions of high-powered decision makers to get a feel for what they might do in the future if standing in the shoes of executives who make the calls during some of the world’s darkest days.

Twenty-two students will participate in this year’s counter-terrorism simulation. Groups of seven will be presented with a scenario at three times during the day: 7:30 to 11 a.m., noon to 3:30 p.m. and 4:30 to 8 p.m.. The counterterrorism simulation will be streamed live at http://law.utah.edu/events.

Guiora brought the idea of a counter-terrorism simulation with him when transitioning into American academia 11 years ago. Guiora underwent his own simulation 20 years ago when he was a candidate for promotion in the Israel Defense Forces. The grueling experience made Guiora realize two things: He never personally wanted to undergo a simulation experience again and he recognized that despite its relentless rigor, simulation is an effective pedagogical tool.

“I felt was important was to introduce students to the simulation paradigm and for them to understand the dilemma of the decision makers who are thrown into these situations. The best way to understand those dilemmas is to create very realistic scenarios for students whereby they play the role of secretary of state, secretary of defense, head of FBI,” said Guiora. “They are confronted with very complex counter terrorism simulations that force them to address questions of law and politics in a very time sensitive and time intensive environment. The exercise requires them to understand the law, articulate the law and understand policy ramifications.”

Students analyze who can be the target of a drone attack and who can’t. A fake CNN monitor rolls in the background, and an elaborate plan to roll out information takes place throughout the simulation. They examine the complex intricacies of how domestic terrorism and international terrorism intertwine.

The University of Utah is unique among U.S. universities in carrying out the exercise and offering the courses that accompany it, Guiora said. Two courses are associated with the counter terrorism simulation; the first, titled “Global Perspectives on Counter-Terrorism” gives students a chance to go through four mini simulations during the course. The second course, Simulation Design, is a year-long class taught in conjunction with Aaron Dewald, associate director of the College of Law’s Center for Legal Innovation, in which students who’ve previously participated in the simulation design the scenarios for the next year’s event.

“We are the only law school in the U.S. where students learn how to create simulations,” said Guiora. “An enormous amount of work goes in to how this is set up.”

Students come out of the experience better prepared for the workforce on a number of fronts, Guiora said. They are evaluated on their performance in the simulation based on how well they perform in areas of advocacy and articulation, information management and analysis, decision-making, and teamwork.

“In addition to gaining a sophisticated understanding of criminal law, constitutional law and international law, the students also have a much better understanding of policy questions, of geopolitical ramifications, understanding working in a team environment, understanding information management, and being forced to articulate their position,” he said.