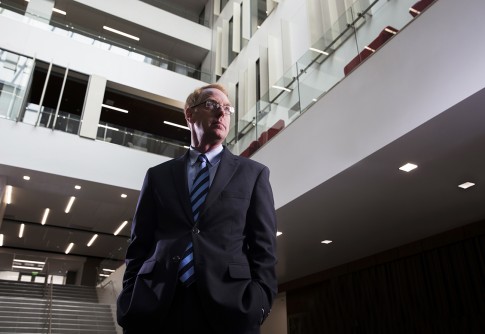 Newswise — A crushing wave of homicides swept through Chicago in 2016, leading to intense discussion over how to stop the bloodshed. As broader discussion over how to curb gun violence continues across the nation, a pair of University of Utah researchers have found a link between the 2016 spike in Chicago homicides and a decline in law enforcement’s ability to use stop-and-frisk policies in policing to approach suspicious people on the street.

In a research paper to be presented April 4 at the University of Illinois College of Law and posted today on the Social Science Research Network, S.J. Quinney College of Law presidential professor Paul Cassell, and University of Utah economics professor Richard Fowles, used an econometric analysis to conclude that the 2016 spike in homicides in Chicago was caused by a reduction in the practice of stop-and-frisks by law enforcement in the wake of a settlement agreement obtained by the American Civil Liberties Union (ACLU) designed to limit stop-and-frisks.

Cassell and Fowles’ study, “What Caused the 2016 Chicago Homicide Spike? An Empirical Examination of the “ACLU Effect” and the Role of Stop-and-Frisks in Preventing Gun Violence,”concludes that fewer people would have died in Chicago if law enforcement were allowed to continue stop-and-frisk practices in policing.

In 2015, following threats by the ACLU of Illinois to sue the Chicago Police Department, an agreement was reached designed to restrict the practice of investigatory street stops, known as “stop-and-frisks,” an approach used by police to proactively investigate people on the street when a reasonable suspicion criminal activity is afoot.  The ACLU argued the practice was unfairly applied and had no real connection to preventing crimes.   To avoid a lawsuit, the police department agreed to change its stop-and-frisk policies by the end of 2015.

The change has had disastrous consequences, according to Cassell and Fowles.  The number of stop-and-frisks carried out by Chicago police fell dramatically beginning in December 2015, and homicides increased dramatically in Chicago in 2016.  In 2015, 480 Chicago residents were killed. The next year, 754 were killed–274 more homicide victims, producing a 58 percent increase in a single year.

Cassell and Fowles ran multiple regression analysis of this sharp upward spike in homicides, as well as related shooting crimes.  Controlling for such things as temperature, arrests for various crime categories, and 911 calls to police, the researchers quantify that the costs of a declining number of stop-and-frisks by police as about 230 additional victims killed and 1100 additional shootings taking place in the city in 2016.  The majority of those killed were African-Americans and Hispanics. In short, the researchers found, the “ACLU Effect” — a term used by some Chicago police officers to describe a rise in crime that they attribute to fewer stop-and-frisks —was a real and lethal problem.

“Our research helps to pinpoint the cause of one of the most striking increases in crime in a major American city in recent years. Sadly, the cause was a restriction on pro-active police policies forced by the ACLU,” said Cassell.

“As a consequence of these changes, Chicago police conducted far fewer stop-and-frisks in 2016.  While the changes were well-intentioned, the results were disastrous.  Many additional homicides and shooting crimes occurred in 2016, particularly some of Chicago’s most impoverished neighborhoods.”

The researchers offer several policy suggestions for Chicago policymakers to consider as a way to change the trend. They suggest: reassessing the benefits of stop-and-frisk as a policing tool; reassuring minority communities that stop-and-frisks can serve a vital law enforcement purpose; removing or simplifying the stop-and-frisk form to make the tool easier for police officers to use; relying on body cameras more broadly; and researching, through randomized controlled trials, the efficacy of stop-and-frisks.

“The costs of crime—and particularly gun crimes—are too significant to avoid considering every possible measure for reducing the toll,” Cassell and Fowles state in the conclusion of their study. “The evidence gathered here suggests that stop and frisk policies may be truly lifesaving measures that have to be considered as part of any effective law enforcement response to gun violence.”