University Sets Goal of $4.5 Billion for the University of Chicago Campaign: Inquiry and Impact 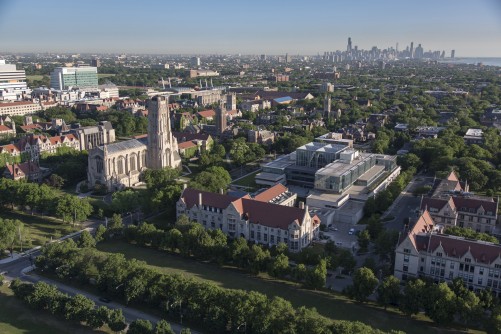 Newswise — The University of Chicago will formally launch the public phase of a comprehensive campaign this fall to raise $4.5 billion. The priorities of the campaign, the most ambitious in the University’s history, include support for faculty and researchers who are shaping fields of inquiry, distinctive educational opportunities for students at all levels, and innovative programs to enhance the University’s local and global reach and impact.

“The University of Chicago Campaign: Inquiry and Impact” will begin its public phase in late October and is expected to conclude in 2019. University officials said the quiet phase of the campaign has already raised more than $2 billion, representing some 182,000 gifts from alumni and friends of the University.

“This campaign offers a singular opportunity to ensure the University continues to take its place among the world’s great centers of discovery, education and impact,” said Andrew M. Alper, chair of the Board of Trustees. “Our faculty, deans, provost and president have identified an ambitious intellectual agenda, and we want to respond with our full support.

“A key factor in the board’s unanimous vote to launch a campaign was President [Robert J.] Zimmer’s intention to serve at least through the end of the decade. The University of Chicago is enjoying ever-greater global eminence under Bob Zimmer’s leadership, and we are lucky to have him as our president.

“The board’s enthusiastic support of our leadership and momentum is evident in the generosity of our trustees, trustee emeriti and their families, who together have donated over $750 million to the campaign thus far, representing more than a third of the money raised during the quiet phase of the campaign,” added Alper. A 1980 graduate of the College who received his MBA from the University of Chicago Booth School of Business in 1981, Alper and his wife, Sharon Sadow Alper, a 1980 graduate of the College and a 1984 graduate of the Law School, are also the parents of a 2011 College alumna.

Joseph Neubauer, a vice chair of the Board of Trustees, will serve as chair of the University of Chicago Campaign: Inquiry and Impact. Neubauer and his wife, Jeanette Lerman-Neubauer, nationally known for their philanthropy, have been generous supporters of the University over the years. Their most recent gift, in 2012, was $26.5 million to create the Neubauer Collegium for Culture and Society, which represents a key achievement of the campaign to date.

“The University is an international leader in enabling scholars from across disciplines to develop and test great ideas. Jeanette and I, as well as thousands of others, believe deeply in the importance of the critical nature of the University of Chicago’s work, and are honored to support it,” said Joseph Neubauer, who received his MBA from Chicago Booth in 1965 and is chairman of the board of Aramark. Neubauer is also the parent of an alumnus with dual graduate degrees from Chicago Booth and the Law School.

Programs like the Neubauer Collegium for Culture and Society, which seeks to broaden humanistic and humanistic social science inquiry by addressing questions that transcend any single discipline, help make the University of Chicago an intellectual destination by attracting interesting thinkers and giving them rich opportunities for inquiry, debate and creative output. This is just one of the many initiatives that the campaign will support across the Hyde Park campus, in the city of Chicago and around the world.

Among other campaign priorities is the Institute for Molecular Engineering, which is defining a new discipline and seeking solutions to key challenges such as the need for clean water through new developments in nanoscale science. The University’s new affiliation with the Marine Biological Laboratory in Woods Hole, Mass., combines with the University’s operation of Argonne National Laboratory and Fermilab to put UChicago scientists at a unique nexus of institutions with international reach.

In the biological sciences and at the University of Chicago Medicine, the campaign will support exploration of basic biological phenomena, computational methods in biology and medicine, and new interventions to treat cancer, while strengthening research in digestive diseases, diabetes, immunology and transplantation.

The campaign will support increased engagement with the University’s 177,000 alumni in 153 countries, whose contributions in their chosen fields are an important part of the University’s impact around the world.

The recently opened Center in Delhi and a planned Center in Hong Kong join the University’s growing global presence, and mark its commitment to collaboration among scholars and students around the world. The Center in Hong Kong will create an expanded hub for Chicago Booth’s research and educational activities in Asia, as well as provide a home for other University programs.

Investments in the College will include enhanced support for the Core curriculum, expanded study-abroad opportunities, new career advancement tracks, the construction of a new, 800-bed residence hall on the north end of campus, and continued growth in financial aid, particularly in Odyssey Scholarships, to ensure that all qualified College students can afford a University of Chicago education. Support for graduate and professional students at every phase of their academic programs is also an important fundraising priority.

Beyond campus, the revitalization of 53rd Street in Hyde Park includes the Chicago Innovation Exchange, scheduled to open in late 2014, which helps researchers and entrepreneurs translate discoveries into products and companies. The Urban Education Institute educates South Side students at four Charter School campuses, supports researchers who examine what makes schools work, and employs the knowledge gained in those spheres to create tools for educators and policymakers across the nation. These are just two examples of an ambitious effort to make the University of Chicago a model for the relationship of a great urban research university to its city and, through the understanding generated by this relationship, to cities around the world.

Across schools and divisions of the University, the campaign will help support recruitment and retention of outstanding faculty, expanded aid and programming for students, and an intellectual environment and facilities that support them in producing their best work.

“We are stewards of a University that has accomplished extraordinary things in a little more than a century. It is our job to ensure that it remains true to its values and that we leave it stronger still, by supporting a faculty whose work is of the greatest originality, depth and impact, and an outstanding student body who will leave the University enriched by their experience and go on to have impact on virtually every field of human endeavor in our nation and around the world,” said Zimmer. “With many new initiatives underway or in the planning stages, in every part of the University, our campaign priorities express and support the ambition of our academic community.”

“The new initiatives launched in recent years signal the promise of the intellectual advancement and breakthroughs ahead,” said Provost Eric D. Isaacs. “This campaign gives our deans and faculty the freedom to think big and the support to do their best work. The next few years will be a very exciting time for them and the entire University community.”

The official launch of The University of Chicago Campaign: Inquiry and Impact in October will include a broader look at both the achievements of the campaign to date and the priorities articulated by the University’s academic leaders.

With more than $2 billion already raised for the new campaign, the University looks to surpass all its previous campaigns combined. At the same time, the University’s annual giving levels have risen significantly, reaching a historic mark of $458 million in the most recent fiscal year total, representing record participation by College alumni and the greatest number of donors in University history. The amount raised in fiscal year 2013 was a 48 percent increase over the previous year, and was topped only by fiscal year 2009—a year that included a $300 million gift from Chicago Booth alumnus David G. Booth, MBA’71.

Kenneth Manotti, vice president of alumni relations and development, said the growing culture of philanthropy at the University is directly linked to excitement about the scholarship and achievements coming out of the University.

“Our supporters have wide interests and varied backgrounds. What they share is a genuine belief that supporting the learning and discovery going on at the University of Chicago is one of the best ways in which they can use their philanthropy to benefit society,” Manotti said. “That belief inspires us and makes me confident in the success of this campaign.”