Unlocking the Mysteries of the Real Paddington Bear 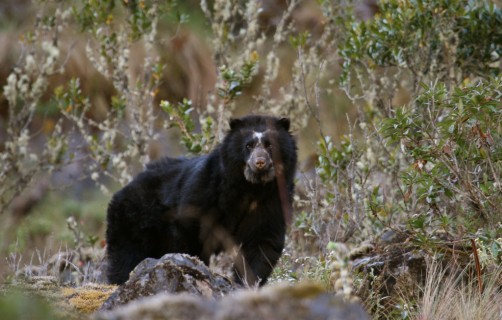 WCS and partners in Bolivia, Colombia, and Peru have published four significant contributions towards the conservation of the real Paddington Bear – the Andean bear (Tremarctos ornatus).

Shrouded in mystery, the Andean bear calls home the fairytale-like cloud forests of the Tropical Andes that run from Venezuela to Bolivia. The biology and ecology of this species is poorly known despite its symbolic and cultural significance in the region and its role as a conservation flagship for the threatened montane forests and upland grasslands of the Andes.

The publication, “Andean Bear Priority Conservation Units in Bolivia and Peru” represents a fundamental contribution to scientific knowledge and conservation of this species. Edited by Dr. Robert Wallace of WCS, with the participation of 25 experts in the field, supported by WCS, the Center for Biodiversity and Genetics from the University of San Simón in Bolivia, the University Cayetano Heredia in Peru and the University of Antwerp in Belgium, the publication provides data on the distribution of the species and assessed its conservation status.

One thousand sixty-six known distribution points of Andean bears in Bolivia and Peru were summarized in 27 maps including: historical range, areas with and without expert knowledge, areas where Andean bears no longer occur, priority conservation units and maps of the Human Influence Index and Human Footprint within the Andean bears range. The maps show that 20 percent of the historical range of the bear in Bolivia and Peru is under formal protection, which exceeds the 17 perecent recommended by the Convention on Biological Diversity.

Contributors identified seven Andean Bear Conservation Units that represent the best chance for their long-term conservation by analyzing their conservation status and their connectivity level: three units exist in Peru; one unit links Peru and Bolivia; and three units are in Bolivia. Together, the units represent almost 58 percent of the current distribution range of the species in Bolivia and Peru.

In Colombia, WCS published two contributions related to the idenification, verification and management of human-Andean bear conflicts: “Guide for the Landscape Diagnostic of Human-Andean Bear Conflicts,” and the “Manual for the Recognition and Evaluation of Livestock Predation Events by Wild Carnivores.” Andean bears are frequently blamed for cattle losses in the remote grasslands of the Andes, and although they are known to very occasionally prey upon cattle, there is no doubt that they receive the blame for more losses than is the case.

In Peru, a “Strategy for the Conservation of Andean Bear in the Historical Sanctuary of Machu Picchu and the Choquequirao Regional Conservation Area” was published by the Peruvian National Parks System (SERNANP), the Regional Government of Cusco, Inkaterra and WCS. The publication recognizes that this iconic area, world famous for its archaeological value, is also important for the conservation of the Andean bear.

Julie Kunen, Executive Director of WCS’s Latin America and Caribbean Programs, said: “Collectively these publications demonstrate our institutional commitment to this magnificent species and the threatened forests and highland grasslands they represent as wildlife ambassadors.”

WCS’s Andean bear conservation work is made possible by the generous contributions from Cleveland Metroparks Zoo and the Cleveland Zoological Society, the Andean Bear Conservation Alliance, and other supporters.”