Unlocking the Mystery of Multiple Sclerosis with Tech

Recruitment begins for a Keck School of Medicine of USC study of the first smartphone app to combine clinical data, MRI imaging and genetic data for people with multiple sclerosis 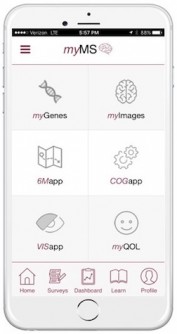 myMS is the world's first smartphone app capable of collecting large amounts of clinical, imaging and genetic data for people with multiple sclerosis. 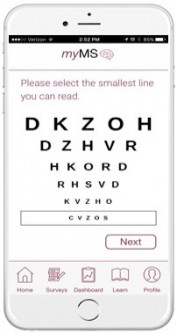 Visual acuity tests, along with six-minute walking and cognitive function tests, are some of the validated clinical measurements integrated into myMS. 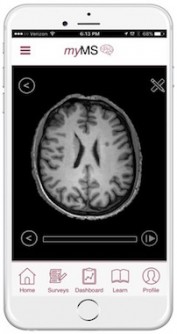 myMS users will be able to transfer their MRI scans into the app and view them in high resolution. 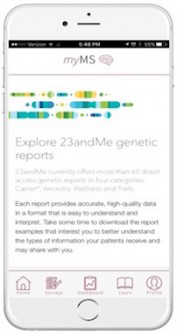 23andMe genetic reports, including carrier status, wellness and ancestry, can be accessed via myMS. 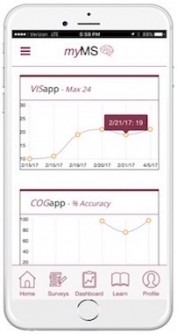 An interactive dashboard will allow myMS users to view and graph their results over time and compare them to other people. 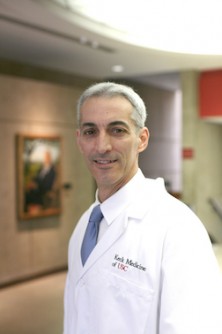 Keck School of Medicine of USC neurologist Daniel Pelletier, MD, is recruiting 200 people nationwide to participate in a pilot study of myMS.

Newswise — LOS ANGELES – What if a single smartphone app could help solve the enigma of multiple sclerosis (MS) and move new treatments ahead at lightning speed? That was the bold idea that led Keck Medicine of USC neurologist Daniel Pelletier, MD, professor of neurology at the Keck School of Medicine of USC and division chief of the Neuro-Immunology and USC Multiple Sclerosis Center, to develop myMS, the world’s first smartphone app capable of collecting large amounts of clinical, imaging and genetic data for people with MS. Enrollment is now underway for a pilot study of the app.

The user-friendly app is a comprehensive platform for collecting data in different domains such as walking, cognition, vision, quality of life, demographics, MRI imaging and genetics. And because the app can be used on any smartphone, anywhere, it breaks down some of the geographic barriers encountered in traditional research.

“We have so much to discover about MS, and our traditional methods of studying it are not going fast enough,” Pelletier says. “Each incremental finding is like one drop of water in the ocean. If we want to reach the point of individualized therapy for MS, we need a massive amount of data, which is what inspired me to think of a solution that was completely out of the box.”

myMS app users will be able to monitor how they are doing through validated walking, cognitive and visual tasks, as well as quality of life questionnaires. An interactive dashboard will allow them to view and graph their results over time and compare them to other people. The app will also allow users to upload their brain MRIs and see them in high resolution within the app as well as access genetic information obtained through personal genetics company 23andMe.

Pelletier hopes the myMS app will give people with MS a chance to take control of their disease.

The pilot study’s goals are to discover how willing people are to participate, how often they perform app-related tasks and how likely they are to share their MRI and genetic information.

Pelletier is recruiting 200 people nationwide for the study. Participants must have a diagnosis of MS, be 18 years of age or older, have a brain MRI, live in the United States and have a smartphone. No clinical visits will be involved.

Participants will be asked to complete six-minute walking tests, cognitive function tests, visual acuity tests and quality of life questions as well as baseline and follow-up surveys through the myMS app. From their home computers, participants will be able to transfer all their MRI scans to the app via a dedicated website. After three months, participants will be offered a free, optional 23andMe genetics kit. Those who choose to use the kit will receive a U.S. Food and Drug Administration–approved genetic report containing information related to ancestry, personal traits and a variety of inherited conditions — all of which will appear within the myMS app.

“This study is just the beginning for myMS. Our ultimate goal is for the app to go viral so we can collect data from people around the world. It could be a powerful tool to get us closer to personalized medicine and breakthrough discoveries,” Pelletier says.

More than 2.3 million people have MS worldwide, according to the National Multiple Sclerosis Society.

For information about how to participate in the study, click here. 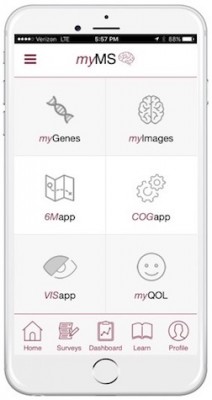 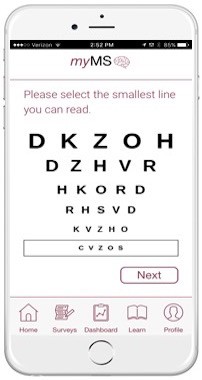 Caption: Visual acuity tests, along with six-minute walking and cognitive function tests, are some of the validated clinical measurements integrated into myMS. 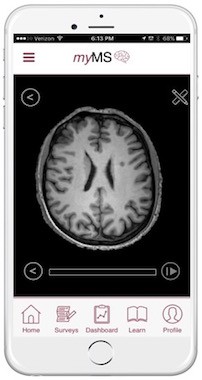 Caption: myMS users will be able to transfer their MRI scans into the app and view them in high resolution. 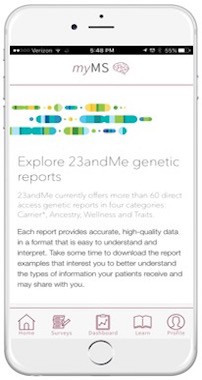 Caption: 23andMe genetic reports, including carrier status, wellness and ancestry, can be accessed via myMS. 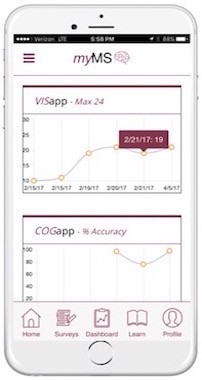 Caption: An interactive dashboard will allow myMS users to view and graph their results over time and compare them to other people. 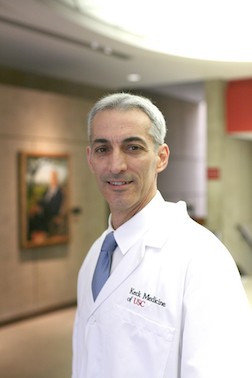 Caption: Keck School of Medicine of USC neurologist Daniel Pelletier, MD, is recruiting 200 people nationwide to participate in a pilot study of myMS.