New research on the molecular structure of suckerin proteins is presented at the annual meeting of the Biophysical Society this week in Los Angeles. 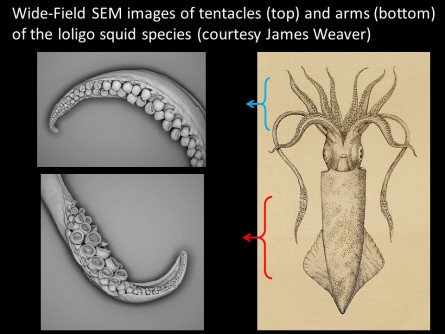 Newswise — WASHINGTON, D.C., February 29, 2016 -- A squid has more in common with a spider than you may think. The razor-sharp 'teeth' that ring the suckers found on some squid tentacles are made up entirely of proteins remarkably similar -- and in some ways superior -- to the ones found in silks. Those proteins, called suckerins, give the teeth their strength and stretchiness, and could one day be used as the basis for biomaterials with many potential biomedical applications.

Hoping to harness the power of suckerin proteins, a team of researchers from Nanyang Technological University (NTU) and the Bioinformatics Institute, A*STAR in Singapore are continuing to unravel the proteins' molecular structures. Akshita Kumar, a graduate student at NTU, will present the group's latest findings at the 60th annual meeting of the Biophysical Society, held Feb. 27 - March 2 in Los Angeles, Calif.

In the recent work, the group found that suckerin proteins are composed of what are known as "beta-sheet" polymer networks, which help give the teeth their strength. The researchers also discovered that the networks are thermoplastic, meaning that they melt when heated and harden again when cooled. That makes the material moldable and reusable like thermoplastic synthetic polymers such as the ones used to make PVC pipes.

"Suckerin proteins constitute a unique combination of mechanical and biophysical properties that appear to make them superior to other synthetic or natural polymers," said Kumar. "And these materials provide a new paradigm by showing that a strong biomaterial can be entirely made of proteins, without the need to add a second hard phase, for instance a mineral like in bone, to strengthen it."

To probe the suckerin's architecture at the molecular level, the researchers used a recombinant bacterial expression system to produce the most abundant suckerin protein, known as Suckerin-19 and found in the crown of jumbo squid sucker ring teeth. They then used a combination of biophysical and computational techniques to determine the 3-D structure of the protein in solution.

Silks also form "beta-sheet" polymer networks and are being studied as potential templates for synthetic silks that mimic their natural counterparts. "But silk proteins are difficult to produce and process," said Kumar. Suckerin proteins, however, have a smaller molecular weight and, given their thermoplasticity, could be easier to make in the lab and more environmentally friendly to process into practical biomaterials, she said.

Their previous results have been partially published in several journals including ACS Nano, Nature Communications, Nature Biotechnology and Advanced Materials.

The team plans to focus on characterizing the structure of other suckerin proteins -- there are 21 -- and their self-assembly in the future. And they're exploring various biomedical applications, too, such as using the biomaterial for scaffolds to grow tissues and fibers like the ones in artificial ligaments.

Although such applications are far from being commercially viable at present, continuing to unlock the secrets of suckerin proteins in the lab and using the knowledge to produce recyclable eco-friendly substrates inspired by suckerins is key to their future development, said Kumar.

The poster #B661,"Squid's suckerin proteins in bits and bytes," by Akshita Kumar, Srinivasaraghavan Kannan, Julien Lescar, Chandra Verma and Ali Miserez will be in a poster session beginning at 1:45 p.m. PT on Monday, Feb. 29, 2016 in the West Hall of the Los Angeles Convention Center. ABSTRACT: http://tinyurl.com/hdvqchy

Each year, the Biophysical Society Annual Meeting brings together more than 6,500 researchers working in the multidisciplinary fields representing biophysics. With more than 3,600 poster presentations, over 200 exhibits, and more than 20 symposia, the BPS Annual Meeting is the largest meeting of biophysicists in the world. Despite its size, the meeting retains its small-meeting flavor through its subgroup symposia, platform sessions, social activities and committee programs. The 60th Annual Meeting will be held at the Los Angeles Convention Center.

The Biophysical Society invites professional journalists, freelance science writers and public information officers to attend its Annual Meeting free of charge. For press registration, contact Ellen Weiss [email protected] or the media line at the American Institute of Physics at [email protected] or 301-209-3090.

Embargoed press releases describing in detail some of the breakthroughs to be discussed at the meeting are available on Eurekalert, Newswise and Alpha Galileo or by contacting the media line at the American Institute of Physics at [email protected] or 301-209-3090.

The Biophysical Society, founded in 1958, is a professional, scientific Society established to encourage development and dissemination of knowledge in biophysics. The Society promotes growth in this expanding field through its annual meeting, monthly journal, and committee and outreach activities. Its 9,000 members are located throughout the U.S. and the world, where they teach and conduct research in colleges, universities, laboratories, government agencies, and industry. For more information on the Society, or the 2016 Annual Meeting, visit www.biophysics.org