Inspired by the atmosphere of a boutique hotel, the 93,500-square-foot Hospitality Hall was designed “for the industry, by the industry.”

Take a peek inside Hospitality Hall, the new academic home for the world-class UNLV Harrah College of Hospitality. 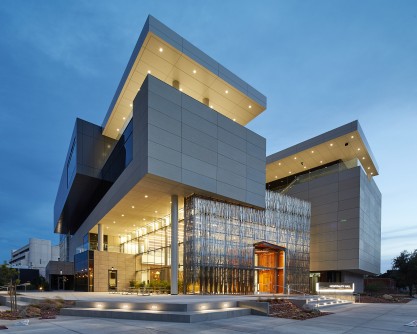 Newswise — At the peak of its 50th anniversary, UNLV’s Harrah College of Hospitality is ringing in the New Year – and the new semester – with the opening of its state-of-the-art academic building, Hospitality Hall.

Inspired by the atmosphere of a boutique hotel, the 93,500-square-foot Hospitality Hall was designed “for the industry, by the industry,” according to principal architect Michael Del Gatto of Carpenter Sellers Del Gatto Architecture.

Hospitality Hall features sweeping views of the Las Vegas Strip and serves as a bridge to the hospitality and gaming industry. With co-mingled classroom, laboratory, and meeting space, the design encourages interaction and a sense of community among students, faculty, and industry professionals.

A dramatic wooden staircase, seen as you pass through the amber-tinted entrance, serves as the focal element that draws visitors in to lounge in the lobby; the advising and career service centers, situated on the first floor, serve as the college’s student concierge desk; a coffee shop and a golf store serve as retail space; and the classrooms/labs on subsequent floors represent ballrooms.

Here’s what went into the making of Hospitality Hall:

More than $24 million of the $59 million building was funded by private donors, reflecting the deliberate effort to give the building a strong connection to Las Vegas’ hospitality industry, while opening the door to new partnerships that extend globally.

The building’s founding donors each contributed $2.5 million in a show of hospitality industry leaders’ commitment to the college. UNLV is consistently ranked as one of the top hospitality programs in the world.

View a time lapse video of the building's construction: https://youtu.be/Pht-E59Mhxc