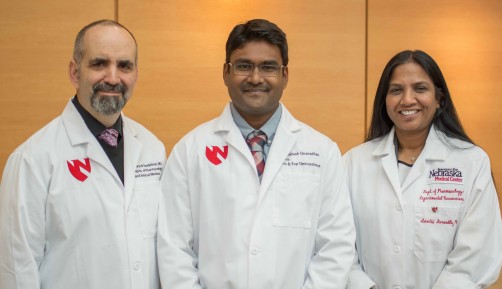 Newswise — A research team at the University of Nebraska Medical Center has used a process they call LASER ART (long-acting slow effective release antiretroviral therapy) to discover an unexpected pathway to open cell storage areas for antiviral drugs. The discovery could revolutionize current treatments for HIV/AIDS by extending the actions of disease-combating medicines. The LASER ART research breakthrough is significant, as the invention could be broadly applied. The discovery allows conventional drugs, taken once or twice/day, to be transformed into once a month dosing. Such changes would ease the burden on patients and their caregivers. The injectable drug bypasses oral absorption and brings the drug to body sites where the virus continues to hide in tissue sanctuaries. The work is detailed in the March issue of the Journal of Clinical Investigation, one of the world’s leading scientific journals reporting novel, high-impact translational research. The 14-member research team was spearheaded by three members of the UNMC Department of Pharmacology/Experimental Neuroscience in the College of Medicine – Divya Prakash Gnanadhas, Ph.D., post-doctoral research associate, Santhi Gorantla, Ph.D., associate professor, and Howard Gendelman, M.D., professor and chair. The team also included researchers from the UNMC College of Pharmacy. Harris Gelbard, M.D., Ph.D., of the University of Rochester Medical Center, discovered the pharmaceutical agent called URMC-099. “This will likely have a strong global impact on HIV/AIDS health care,” said Dr. Gendelman, whose laboratory has pursued research for more than a decade on LASER ART. “Getting people to take medication every day is difficult. To be able to take medication once a month or even longer will make it much easier for patients to be compliant while at the same time help bring the drug to tissues of the body that are not easily reached by conventional medicines.” The LASER ART developed by the UNMC scientists is a formulation of injectable drugs, he said. The long-lasting medication was developed by making pharmacological changes in the chemical structure of the drug, while at the same time protecting its abilities to contain infection. The new drug formulation is not an anti-HIV medicine, Dr. Gorantla said, but rather one that opens storage areas inside cells where drugs can be maintained for a long period of time. This extends the intervals for dosing and allows physicians to administer the drug over an extended period of time. Prior to this discovery, Dr. Gorantla said only two drugs had been modified in this fashion. Their use was limited, she said, because each injection would require several ounces of drug with larger volumes in each succeeding injection. This amount of drug given can potentially be cut in half with this new medication. Dr. Gendelman said LASER ART enables drug crystals to reach destinations in tissues and blood and stay there. These drug crystals are protected against destruction (metabolism) in the liver and excretion in the kidney and urine. To accomplish this, the scientists merged LASER ART with URMC-099, which alone has no antiviral effect. Co-administration with antiretroviral medicines provides enhanced viral suppression, Dr. Gorantla said. The scientists discovered that several innovative strategies – slow drug dissolution, poor water-solubility and improved bioavailability – could bring the medication to the sites of active viral growth and accelerate clearance of the virus. “We showed that one drug can deliver the other drug to sites inside the cells where the virus grows and at the same time sequester the drug crystals at sites protecting it from degradation,” she said. “The drug inside the cell slowly dissolves from the crystal and is released into the blood. “This is a new way to extend the actions of drugs,” Dr. Gnanadhas said. “It is a means to improve drug effectiveness and to allow patients to take drugs without interruption.” The drugs were formulated through UNMC’s good laboratory practice (GLP) manufacturing facility. Financial support for the project was provided by Vice Chancellor for Business and Finance Deb Thomas. Dr. Gendelman said the next step is to formulate URMC-099 with drug cocktails and investigate whether such a chemical marriage can extend the half lives of many other antiretrovirals and a spectrum of other drugs. Ultimately, they hope to combine URMC-099 with drugs that have been limited for human use due to the frequency and bioavailability of their required dosing to be effective.