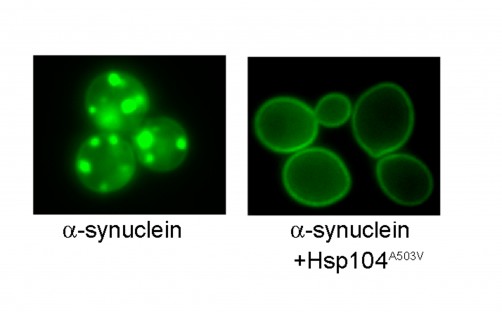 Alpha-synuclein forms Lewy Body-like inclusions in the cytoplasm of yeast (left) but these are dissolved and alpha-synuclein returns to the plasma membrane upon expression of an engineered Hsp104 variant.

Newswise — PHILADELPHIA - At the heart of brain diseases such as amyotrophic lateral sclerosis (ALS), Alzheimer's disease, and Parkinson's disease is protein misfolding, in which distorted proteins are unable to perform their normal functions. At present, there is no known way to reverse protein misfolding.

But James Shorter, Ph.D., associate professor of Biochemistry and Biophysics, at the Perelman School of Medicine, University of Pennsylvania, has found a possible way to unravel misfolded proteins by "reprogramming" Hsp104, a common yeast protein. The work was published this week in Cell.

Hsp104 is a "chaperone" protein, one that assists in the proper formation and functioning of other protein complexes. Although Hsp104 is one of the most common proteins on the planet, it has no analogue in humans or animals.

"We don't understand why animals have lost the gene for Hsp104, but at the same time, we've been wondering: ‘Is there a therapeutic opportunity in this?’” asks Shorter. “Can we add it back as a disruptive technology to antagonize the protein misfolding that characterizes some diseases?"

In previous studies, Shorter's lab established that the natural version of Hsp104 is active against neurodegenerative proteins such as alpha-synuclein. “We expressed the wild-type protein in a rat model of Parkinson’s disease and observed beneficial phenotypes," explains Shorter. “But the wild-type protein just doesn’t work as well as we would like."

In the present study, the team screened large libraries of Hsp104 variants to find versions that could both maintain protein structure and break up misfolded clumps. “Luckily several variants came out of our screen that could suppress the toxicity associated with misfolded and clumped FUS, TDP-43, and alpha-synuclein disease proteins in yeast, while also enhancing proper protein function,” he adds.

Shorter's team collaborated with the lab of Guy Caldwell at the University of Alabama to test Hsp104 variants in the worm C. elegans and found marked rescue of alpha-synuclein toxicity, the first time that engineered enzymes have been shown to suppress neurodegeneration in a multicellular animal.

"This is very exciting, as there are no agents that are known to rescue neurodegeneration and at the same time reverse protein misfolding," notes first author Meredith Jackrel, Ph.D., a postdoctoral fellow in the Shorter lab. "Certainly nobody's ever tried to reprogram an existing protein to try to accomplish that task."

Shorter identified Hsp104's coiled-coil middle domain as a major area affecting its ability to function as a chaperone, noting that minor mutations in this domain appear to have wide-ranging potential to unlock the molecule's protein clump-busting capabilities. He suggests that the middle domain of Hsp104 functions much like an electrical capacitor, storing the protein's beneficial possibilities. A seemingly small tweak of the middle-domain structure, as well as other parts of the molecule such as the pore loops, can unleash a surprising therapeutic power.

With that power now demonstrated in the relatively primitive worm species, the team's next step will be to move to a more complex animal model in mice, where the side effects of introducing a foreign protein into an organism might be a concern.

Shorter explains that aside from Hsp104's declumping function, "the other major goal from a bioengineering viewpoint is to make the tweaked Hsp104 specific in what it targets because all the variants we have at the moment seem to work across the board. That's not what you want for a therapeutic, because there might be off-target effects."

He stresses that although his protein reengineering approach is not yet a cure or practical treatment for neurodegenerative disease, it's a major first step toward that ultimate goal and shows that clump busting -- what was previously thought impossible -- is within reach, adding, "We've defined that it is possible to achieve clot-busting activity in a simple model system. The challenge is to move it forward from there."