Surprising Property, Presented at the American Crystallographic Association Meeting in Hawaii, Could Aid in the Design of Pressure Sensors and Artificial Muscles 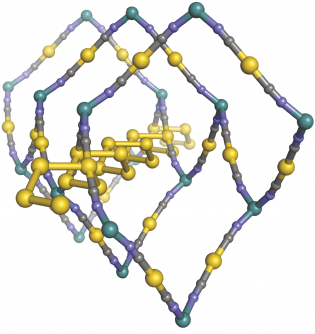 A representation of zinc dicyanoaurate showing a spring-like gold helix embedded in a flexible honeycomb-like framework. (Grey balls are carbon atoms, purple is nitrogen, and teal is zinc.)

Newswise — If you squeeze a normal object in all directions, it shrinks in all directions. But a few strange materials will actually grow in one dimension when compressed. A team of chemists has now discovered a structure that takes this property to a new level, expanding more dramatically under pressure than any other known material. The finding could lead to new kinds of pressure sensors and artificial muscles.

Andrew Cairns, a graduate student at the University of Oxford and a member of the research team, will discuss the new material and its applications at the American Crystallographic Association meeting held July 20-24 in Honolulu.

Negative linear compression, or NLC, has existed for millions of years; in fact, biologists believe octopi and squid use the phenomenon to make their muscles contract. Only in recent decades, however, have scientists learned to design materials with this property. Until a few years ago, none of these manmade structures had been found to expand more than a fraction of a percent under compression, making them of limited use in engineering. But researchers are now learning how to design materials that expand far more than those previously known. The trick, say the scientists presenting this latest work, is to look for structures that can respond to pressure by rearranging their atoms in space without collapsing.

The material the research team discovered, zinc dicyanoaurate, does just that. Its unique structure combines a spring-like helical chain of gold atoms embedded in a honeycomb-like framework made of gold, cyanide (carbon bonded to nitrogen), and zinc. When the chain is compressed, the honeycomb flexes outward by as much as 10% – several times what had been achieved by any previous material. The scientists call this large response “giant negative linear compressibility,” and compare it to a collapsible wine rack that folds up horizontally by expanding substantially in the vertical direction. Andrew Goodwin of Oxford, leader of the research team, says these wine rack structures represent “a new block in our Lego kit.”

Zinc dicyanoaurate’s unique properties make it promising for several applications. In the immediate term, the material, which is transparent, could be used as an optical pressure sensor. Compression causes the crystal spacing to narrow in one direction and widen in another, changing the path light takes through the material in a way that is sensitive to tiny variations in pressure. A longer-term application is artificial muscle design. Our muscles contract in response to an electric field, but new muscles could be designed to contract when pressure is applied, as biologists believe octopus muscles do.

Goodwin’s team is now working to understand more fully the mechanisms behind NLC. But even without a complete picture of nature’s design principles, they feel confident zinc dicyanoaurate is already “pushing the limits” of how far any material will be able to expand under pressure. “We’ve got a pretty good feel for what the limits are,” Goodwin says. “This material is pretty special.”