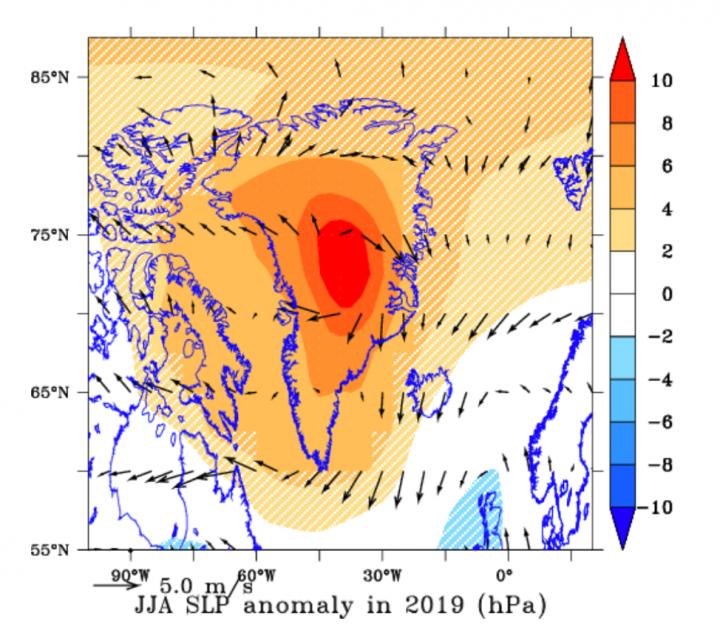 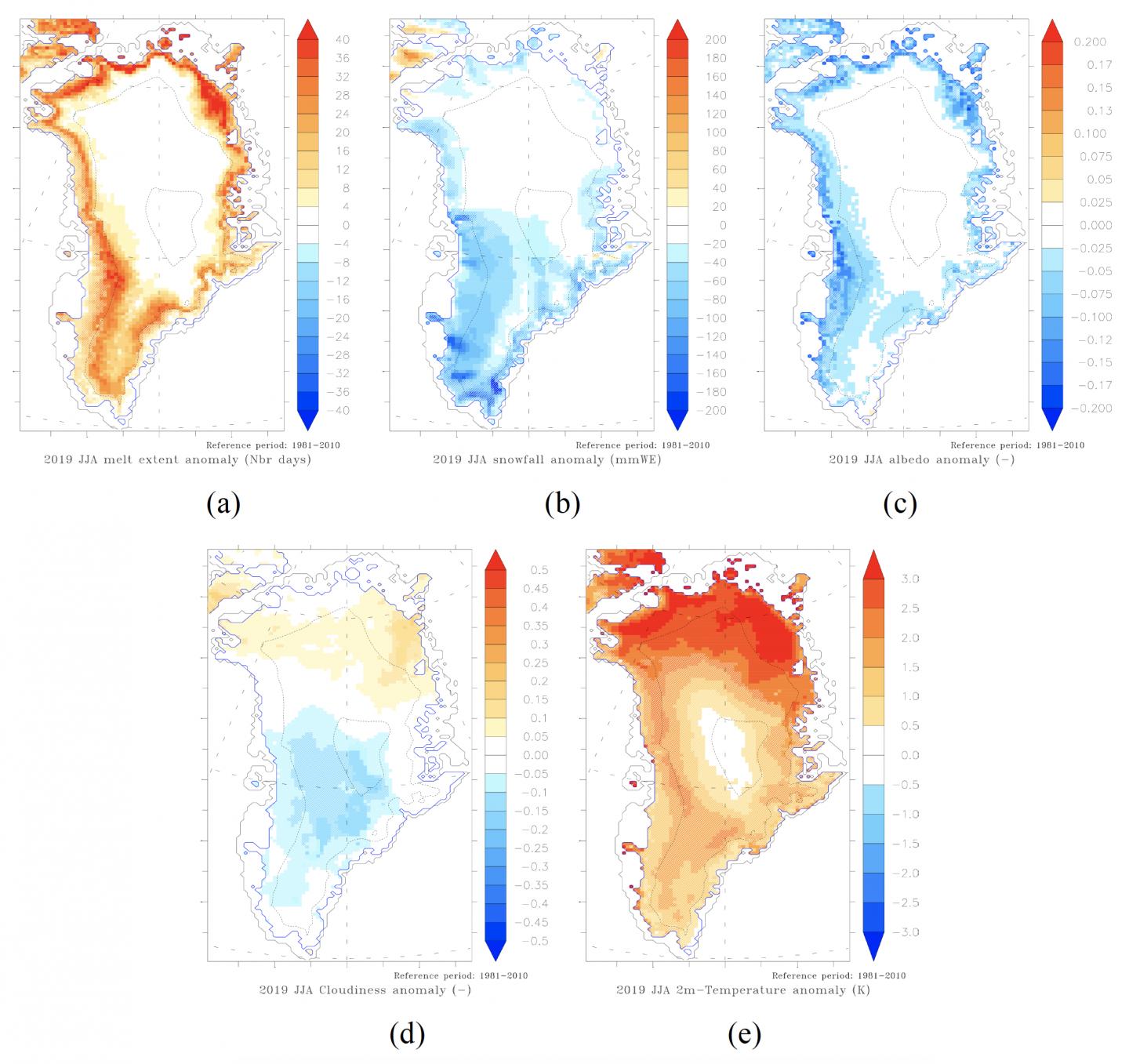 Summer 2019 anomalies in number of melting days (a), snowfall (b), albedo (c), cloudiness (d), and temperature two meters above the ice (e). 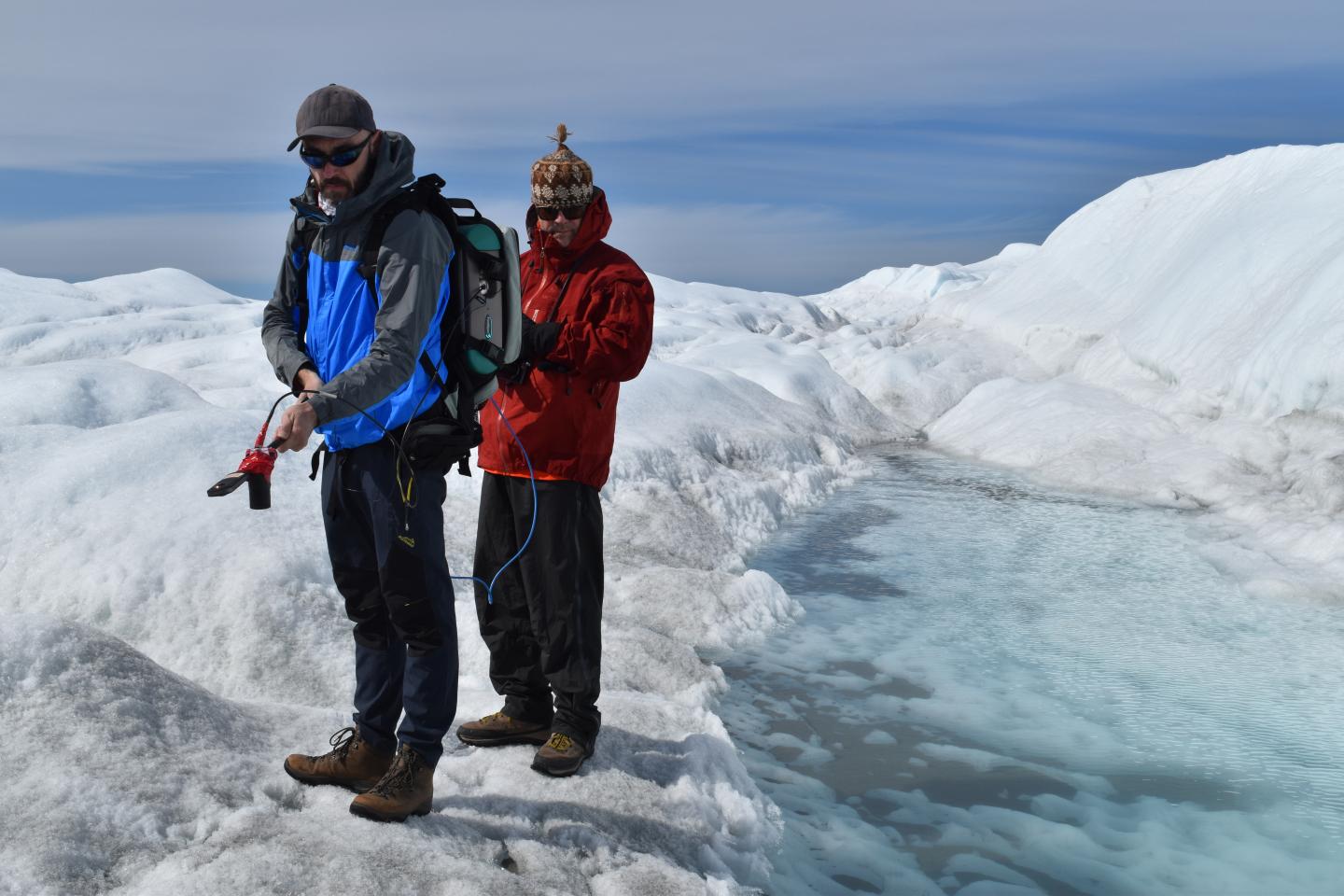 Marco Tedesco (left) and a colleague measure reflectance on the Greenland ice sheet during a 2018 expedition.

Newswise — Last year was one of the worst years on record for the Greenland ice sheet, which shrunk by hundreds of billions of tons. According to a study published today in The Cryosphere, that mind-boggling ice loss wasn't caused by warm temperatures alone; the new study identifies exceptional atmospheric circulation patterns that contributed in a major way to the ice sheet's rapid loss of mass.

Because climate models that project the future melting of the Greenland ice sheet do not currently account for these atmospheric patterns, they may be underestimating future melting by about half, said lead author Marco Tedesco from Columbia University's Lamont-Doherty Earth Observatory.

The study used satellite data, ground measurements, and climate models to analyze changes in the ice sheet during the summer of 2019.

The researchers found that while 2019 saw the second-highest amount of runoff from melting ice (2012 was worse), it brought the biggest drops in surface mass balance since record-keeping began in 1948. Surface mass balance takes into account gains in the ice sheet's mass -- such as through snowfall -- as well as losses from surface meltwater runoff.

Before now, 2012 was Greenland's worst year for surface mass balance, with a loss of 310 billion tons compared to the 1981-2010 baseline. Yet summer temperatures in Greenland were actually higher in 2012 than in 2019 -- so why did the surface lose so much mass last year?

Tedesco and co-author Xavier Fettweis, from the University of Liège, found that the record-setting ice loss was linked to high-pressure conditions (called anticyclonic conditions) that prevailed over Greenland for unusually long periods of time in 2019.

The high pressure conditions inhibited the formation of clouds in the southern portion of Greenland. The resulting clear skies let in more sunlight to melt the surface of the ice sheet. And with fewer clouds, there was about 50 billion fewer tons of snowfall than usual to add to the mass of the ice sheet. The lack of snowfall also left dark, bare ice exposed in some places, and because ice doesn't reflect as much sunlight as fresh snow, it absorbed more heat and exacerbated melting and runoff.

Conditions were different, but no better, in the northern and western parts of Greenland, because as the high pressure system spun clockwise, it pulled up warm, moist air from the lower latitudes and channeled it into Greenland.

"Imagine this vortex rotating in the southern part of Greenland," Tedesco explained, "and that is literally sucking in like a vacuum cleaner the moisture and heat of New York City, for example, and dumping it in the Arctic -- in this case, along the west coast of Greenland. When that happened, because you have more moisture and more energy, it promoted the formation of clouds in the northern part."

But instead of bringing snowfall, these warm and moist clouds trapped the heat that would normally radiate off of the ice, creating a small-scale greenhouse effect. These clouds also emitted their own heat, exacerbating melting.

Through these combined effects, the atmospheric conditions of the summer of 2019 led to the highest annual mass loss from Greenland's surface since record-keeping began.

With the help of an artificial neural network, Tedesco and Fettweis found that 2019's large number of days with these high-pressure atmospheric conditions was unprecedented. The summer of 2012, one of Greenland's worst years, also saw anticyclonic conditions.

"These atmospheric conditions are becoming more and more frequent over the past few decades," said Tedesco. "It is very likely that this is due to the waviness to the jet stream, which we think is related to, among other things, the disappearance of snow cover in Siberia, the disappearance of sea ice, and the difference in the rate at which temperature is increasing in the Arctic versus the mid-latitudes." In other words, climate change may make the destructive high-pressure atmospheric conditions more common over Greenland.

Current global climate models are not able to capture these effects of a wavier jet stream. As a result, "simulations of future impacts are very likely underestimating the mass loss due to climate change," said Tedesco. "It's almost like missing half of the melting."

The Greenland ice sheet contains enough frozen water to raise sea levels by as much as 23 feet. Understanding the impacts of atmospheric circulation changes will be crucial for improving projections for how much of that water will flood the oceans in the future, said Tedesco.

Caption: Summer 2019 anomalies in number of melting days (a), snowfall (b), albedo (c), cloudiness (d), and temperature two meters above the ice (e).

Caption: Marco Tedesco (left) and a colleague measure reflectance on the Greenland ice sheet during a 2018 expedition.