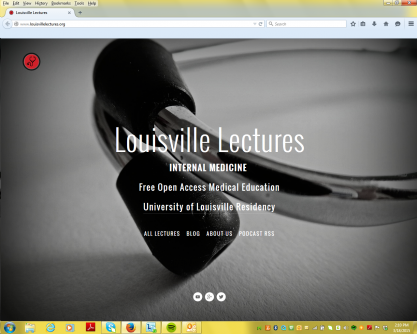 The home page of LouisvilleLectures.org features links to lectures, blogs and other multimedia providing information on a variety of internal medicine topics.

Newswise — LOUISVILLE, Ky. – The University of Louisville Department of Medicine has launched what is believed to be the first open-access internal medicine education online community in the United States.

LouisvilleLectures.org provides free evidenced-based medical education lectures that are available to anyone. The project was developed by resident physicians in internal medicine – physicians who have received their medical degrees but are still in training before practicing on their own. The lectures are presented by faculty from the University of Louisville School of Medicine.

The project makes internal medicine didactic lectures, grand rounds and other special lectures easily accessible to UofL residents and for the education of medical students, physicians and other medical professionals everywhere. Over 40 lectures are already online, attracting more than 1,400 subscribers from over 100 countries, with over 25,000 views.

“We have faculty at the UofL School of Medicine who are extremely knowledgeable and amazing teachers. Why keep this knowledge to ourselves, when we can contribute to the international community of medical education?” Koch said. “Our goal is to teach the world medicine.”

The effort is part of the international #FOAMed movement. Advocates of #FOAMed seek to accelerate medical knowledge sharing.

The hashtag refers to the concept of Free Open Access “Meducation” (medical education), first promoted at the 2012 International Conference on Emergency Medicine in a lecture by Mike Cadogan, an emergency medicine physician, educator and digital media enthusiast from Australia. Frustrated by the resistance of many physicians and medical educators to the serious potential of social media, he decided to rebrand what he and others were doing online as a form of continuing education.

"We've actively managed to engage a large group of researchers and significant academics who are moving away from writing textbooks and journal articles to doing more in the online arena," Cadogan said. "That's lending a sense of credence to what we're doing."

"The journals are still an essential part of the culture we work in," he allowed, but medical education is starting to be influenced by the open source and open content trends on the Internet, where "you take all the simple stuff, all the basic knowledge, and make it free."

While never intended to replace traditional medical education, #FOAMed efforts such as LouisvilleLectures.org will greatly augment the availability and access of quality medical education programs.