Professor Tweets Her Way to Knighthood 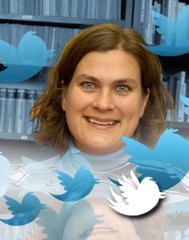 Newswise — The creative use of Twitter and other technology to teach and promote French has earned a University of South Carolina associate professor knighthood by the French government. Dr. Lara Lomicka Anderson, a faculty member in the College of Arts and Sciences, has been honored by France’s Ministery of Education with the Chevalier dans l’Ordre des palmes academiques. Anderson will be knighted and honored with a medallion during a visit by the consul general this fall. The order, which was established by Napoleon Bonaparte and is one of the world’s oldest orders of knighthood, recognizes significant academic contributions to the study and advancement of the French language. Anderson and Dr. Lara Ducate, a USC faculty member who teaches German, garnered public attention last fall for their use of the micro-blogging tool Twitter to encourage students to practice their foreign language skills through online conversation. They say it has fostered conversation and built a sense of community in and outside of the classroom. Anderson’s selection for knighthood stems from her success in integrating technology and scholarship. She has shared her successful use of technology to promote French through scholarly articles in the American Association of Teachers of French (AATF) publications and other scholarly journals, presentations on foreign language teaching techniques at academic conferences and through her work as chairman of the AATF Commission on Telematics and New Technologies.

Anderson is software review editor for The Computer-Assisted Language Instruction Consortium Journal, and is co-editor of the book, “The Next Generation: Social Networking and Online Collaboration in Foreign Language Learning.”