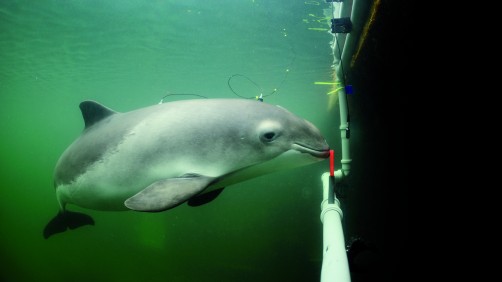 Harbor porpoise engaged in experiment where its hearing sensitivity is measured by means of electrodes attached with suction cups to the skin.

Newswise — WASHINGTON, June 28, 2022 – Noise produced by pile drivers building offshore wind turbines can damage the hearing of porpoises, seals, and other marine life. Regulations are in place, but guidance on this difficult topic requires regular revisits to incorporate results from new experiments.

Current guidance is based on extensive literature reviews by the U.S. National Marine Fisheries Service, but the review is 7 years old and may not provide the protection these species currently need.

Regulations are issued by government agencies, such as the Danish Energy Agency and the U.S. National Marine Fisheries Service. The guidelines put limits on the intensity of noise to prevent temporary and permanent hearing loss by marine mammals.

The noise restrictions are based on measurements on animals in captivity exposed to noise levels that induce a temporary threshold shift (TTS) in hearing. The TTS onset threshold is the lowest noise exposure capable of inducing a small temporary reduction of hearing sensitivity, also known as auditory fatigue, with full recovery shortly after exposure.

While these TTS values correspond to temporary hearing impairment, they can be used to extrapolate higher noise levels that would inflict permanent damage. These levels are used to regulate activities producing loud noise, such as pile driving, seismic surveys, and navy sonars.

Since different species have different hearing, adjustment of the guidelines for the hearing abilities of different animal groups were developed. Their results were sent to the Danish Energy Agency and formed the basis for the most recent update of Danish guidelines regarding assessment of impact of offshore wind energy development on marine life.

"Harbor porpoises and harbor seals are of particular interest with respect to pile driving, because they are acoustically sensitive and among the most common marine mammals in shallow western European waters, a center of the rapidly expanding offshore wind farm industry," said author Jakob Tougaard.

Current guidance for seals and porpoises is based on very few measurements in a limited frequency range. While the guidance is still valid for these frequencies, investigators found substantial deviations in recent studies of the impact of low frequency noise on seals and high frequency noise on porpoises. Changes in the Danish guidelines account for these new results.

"Retaining the current guidance has the possible consequence of over-regulating future activities rather than endangering the animals," Tougaard said. "The observed discrepancies between predicted and measured TTS onset thresholds can only be resolved through new and dedicated experiments."

The Journal of the Acoustical Society of America (JASA) is published on behalf of the Acoustical Society of America. Since 1929, the journal has been the leading source of theoretical and experimental research results in the broad interdisciplinary subject of sound.  JASA serves physical scientists, life scientists, engineers, psychologists, physiologists, architects, musicians, and speech communication specialists. See https://asa.scitation.org/journal/jas.

The Journal of the Acoustical Society of America