Upper Paleolithic Humans May Have Hunted Cave Lions for Their Pelts 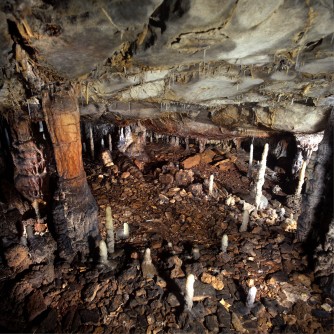 Newswise — Upper Paleolithic humans may have hunted cave lions for their pelts, perhaps contributing to their extinction, according to a study published October 26, 2016 in the open-access journal PLOS ONE by Marián Cueto from the Universidad de Cantabria, Spain, and colleagues.

The Eurasian cave lion, likely among the largest lion species ever to have lived, became extinct around 14,000 years ago, but the reasons for its disappearance are not clear. Upper Paleolithic humans were previously known to have hunted other small and large carnivores, but archaeological evidence of lion hunting is sparse. To help fill in this gap, Cueto and colleagues examined nine fossilized cave lion toe bones from the Upper Paleolithic cave site of La Garma, in northern Spain, for evidence of cave lion exploitation by humans.

The researchers found that most bones showed signs of having been modified by humans using stone tools, with a specialized technique similar to that used by modern hunters when skinning prey to keep the claws attached to the fur. The authors suggest that the toe bones they analysed may therefore have been part of a single lion pelt, which possibly lay on the floor of the occupied cave. La Garma is known to have been associated with human rituals, and cave lions may have been symbolic animals for Upper Paleolithic humans.

While the analysis is not definitive evidence that Upper Paleolithic humans exploited cave lions for their pelts, the authors speculate that human hunting of cave lions, perhaps as part of ritual activities, might have been a factor in cave lion extinction.

In your coverage please use this URL to provide access to the freely available paper: http://dx.plos.org/10.1371/journal.pone.0163591

Funding: Fieldwork in La Garma is possible thanks to the financial support of Government of Cantabria within the framework of the agreements with the University of Cantabria. EC has been beneficiary of a FI-AGAUR Grant from the Generalitat de Catalunya, and developed a research stay at Instituto Internacional de Investigaciones Prehistóricas de Cantabria (University of Cantabria).