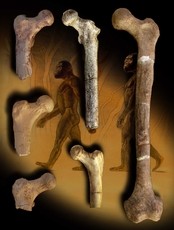 Newswise — A shape comparison of the most complete fossil femur (thigh bone) of one of the earliest known pre-humans, or hominins, with the femora of living apes, modern humans and other fossils, indicates the earliest form of bipedalism occurred at least six million years ago and persisted for at least four million years. William Jungers, Ph.D., of Stony Brook University, and Brian Richmond, Ph.D., of George Washington University, say their finding indicates that the fossil belongs to very early human ancestors, and that upright walking is one of the first human characteristics to appear in our lineage, right after the split between human and chimpanzee lineages. Their findings are published in the March 21 issue of the journal Science.

The research is the first thorough quantitative analysis of the Orrorin tugenensis fossil " a fragmentary piece of femur " which was discovered in Kenya in 2000 by a French research team. Dr. Jungers, Chair of Anatomical Sciences at SBU School of Medicine, and Dr. Richmond, Associate Professor of Anthropology at GWU and a member of GWU's Center for the Advanced Study of Hominid Paleobiology, completed a multivariate analysis of the proximal femora shape of a young adult O. tugenensis that enabled them to pinpoint the pattern of bipedal gait for this controversial hominin. Their analysis included a large and diverse sample of apes, other early hominins, including Australopithecus, and modern humans of all body sizes.

"This research solidifies the evidence that the human lineage split off as far back as six million years ago, that we share ancestry with Orrorin, and that our ancestors were walking upright at the time," says Dr. Richmond. "These answers were not clear before this analysis."

"Our study confirms that as early as six million years ago, basal hominins in Africa were already similar to later australopithecines in their anatomy and inferred locomotor biomechanics," adds Dr. Jungers. "At the same time, by way of the analysis, we see no special phylogenetic connection between Orrorin and our own genus, Homo."

In "Orrorin tugenensis Femoral Morphology and the Evolution of Hominin Bipedalism," the authors articulate that the analysis and morphological comparisons among femora from the fossils showed that O. tugenensis is distinct from those of modern humans and the great apes in having a long, anteroposteriorly narrow neck and wide proximal shaft. Early Homo femora have larger heads and broader necks compared to early hominins. In addition to these features, modern human femora have short necks and mediolaterally narrow shafts.

The challenge ahead, explains Dr. Jungers, is "to identify what precipitated the change from this ancient and successful adaptation of upright walking, and climbing, to our own obligate form of bipedalism."

The Department of Anatomical Sciences at Stony Brook University School of Medicine is known internationally for the scope and significance of its research into evolutionary morphology, including paleoanthropology, field-based vertebrate paelontology and experimental functional anatomy. The department interacts with other departments in the School of Medicine, as well as those in Biological Sciences and the Department of Anthropology, through which the Interdepartmental Doctoral Program in Anthropological Sciences (IDPAS) is administered. The Stony Brook IDPAS faculty brings world-renowned strengths in functional morphology and human evolution.