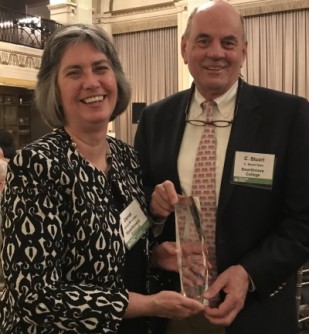 Jan Semler and Stu Hain, who helped lead the project, accepted the Rouse award on behalf of the College.

Newswise — This month, the Philadelphia chapter of the Urban Land Institute (ULI) honored Swarthmore for its Town Center West project.

The ULI award, the Willard G. "Bill" Rouse III Award for Excellence, recognizes "leadership in the responsible use of land and in creating and sustaining thriving communities." The College has now received four awards for the project, which opened last year and which brought the Inn at Swarthmore, Broad Table Tavern, and the Swarthmore Campus and Community Store to, and strengthened its partnership with, the borough of Swarthmore.

“It’s quite a tribute to the entire team from the borough, the College, and our many consultants and contractors who helped to bring this visionary project to reality,” says Director of Capital Planning and Project Management Jan Semler, who accepted the Rouse award on behalf of the College along with Stu Hain, vice president for facilities and capital projects.

The result of a nearly 20-year-long community planning process, the inn, restaurant, store, and related improvements to the area have helped contribute to the College’s and the borough’s vision for a thriving town center.

“It’s a delight to see how well the facility has been received by the community and visitors to the College,” adds Hain. “The quality of design, the welcoming nature of the interior spaces, and the joy of seeing the student and alumni art have been complimented over and over.”

The project has also garnered the William H. Bates Memorial Award for Outstanding Land Development for 2016 from the Delaware County Planning Commission; a 2017 Diamond Award from the American Council of Engineering Companies of Pennsylvania for the roundabout on Chester Road; and 2017 Suburban Project of the Year by Architecture Construction Engineering Mentor Program of Eastern Pennsylvania.

Swarthmore faced fierce competition for the Rouse Award from other high-profile projects in the eastern and central regions of Pennsylvania, southern New Jersey, and Delaware. The criteria included factors beyond innovation in planning and design, such as sustainability, adaptability to other communities, and social impact to address neighborhood revitalization goals.

Recent media coverage of the project has praised the traditional informal style of the inn along with the project as a whole: "Not only [does] it provide an architectural bridge between the college campus and Swarthmore Borough’s compact downtown, it also refashioned a dangerous and confusing intersection on the main north-south road through town into an attractive roundabout that enhances the downtown’s village feel."