The URI experimental saffron plot yielded 12 pounds of saffron per acre last year, compared to about 5 pounds per acre in Iran in the second year of growth.

Newswise — KINGSTON, R.I. – November 6, 2019 – Saffron is the world’s most expensive spice, selling for about $5,000 per pound at wholesale rates, and 90 percent of the global saffron harvest comes from Iran. But University of Rhode Island agriculture researchers have found that Ocean State farms have the potential to get a share of the market as demand for saffron in the United States grows.

“Saffron isn’t commonly grown in the U.S.; the USDA doesn’t even track saffron production,” said Rebecca Brown, URI professor of plant sciences, who is overseeing a study to test how well the plant grows in Rhode Island. “It’s tolerant of arid conditions, which is why it’s mostly grown in the poor dry soils of southeastern Iran. But until the last couple of years, no one had tried to grow it in southern New England’s moist rich soils.”

A member of the crocus family and nicknamed Red Gold, saffron comes from drying the stigma in the flower of the 3- or 4-inch tall plants. The plant grows from a bulb-like corm, similar to tulips and daffodils, rather than from seeds, and each planted corm produces three additional corms every year, so it grows exponentially from year to year.

“It’s a fall flowering plant and isn’t harvested until late October, so it extends the season for farmers whose growing season is mostly over by now,” said Rahmatallah Gheshm, a URI postdoctoral researcher who moved to Rhode Island with his family in 2016 after working as a vegetable seed producer and saffron grower in Iran for 27 years.

Demand for saffron in the U.S. is growing significantly as more and more people from the Middle East and South Asia move here and as appreciation grows for Middle Eastern and Indian foods. In 2016, about 35 tons of saffron was imported into the United States, which is predicted to increase to 50 tons by 2021.

In addition to its use as a spice, saffron is also used as a source of food coloring and fabric dye, and it is purported to have medicinal uses for those fighting cancer, depression and age-related macular degeneration.

Gheshm is leading the saffron research study at URI’s agricultural fields to determine the best methods for growing it in Rhode Island. His experiments have assessed the best planting densities and whether it should be covered or exposed during the winter months.

“So far we’ve learned that we can definitely produce saffron here,” Gheshm said. “Our second-year harvest had twice the yield as saffron grown in Iran, and we predict that this year’s harvest may be triple of Iran. With the good soil and water and weather here, we’re getting a bigger yield.”

The URI experimental saffron plot yielded 12 pounds of saffron per acre last year, compared to about 5 pounds per acre in Iran in the second year of growth.

According to Brown, one Rhode Island farmer is already growing saffron commercially, and she has heard from several others who are interested in trying it.

“It’s an attractive crop because you don’t need sophisticated farm equipment or technology to grow it,” she said. “It’s a lot less work to grow than vegetables – though it’s more labor intensive to harvest, which is why saffron is so expensive. It also doesn’t have insect or disease problems here, and you don’t have to water it. All of that is attractive to farmers.”

Brown and Gheshm have been awarded a grant from the Rhode Island Division of Agriculture to conduct additional studies of saffron production to determine whether it is best grown in monoculture or if it can be grown with other plants to increase farm revenues.

“Saffron is dormant from June to September, which is our prime growing season for annual crops,” Brown said. “If farmers can plant something else – lettuce, basil, flowers – on top of their saffron, how does that affect the yield of saffron and whatever else you’re planting on it? That’s the next question we want to answer.”

The grant will also fund a conference at URI for farmers and agricultural scientists interested in learning more about saffron production. 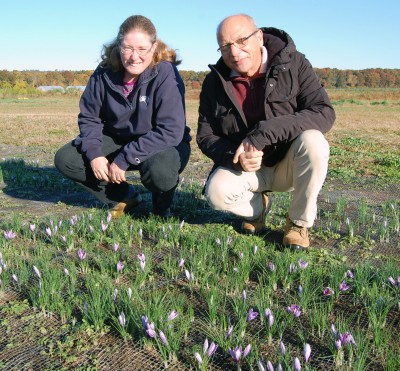 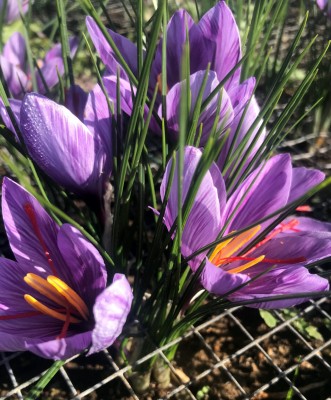