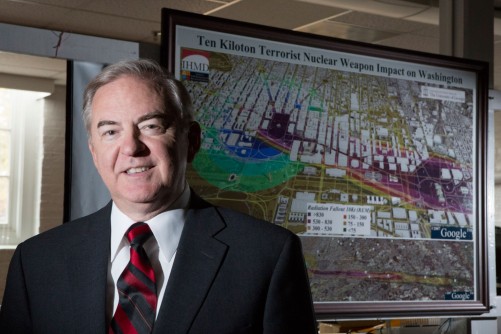 Cham E. Dallas is a professor of health policy and management and director of the Institute for Disaster Management at UGA's College of Public Health.

Note to editors and producers: Cham Dallas is available to comment on North Korea’s nuclear weapons program and the potential consequences of a nuclear attack. He can speak to broadcast media using UGA’s VideoLink ReadyCam studio, which is fully equipped with an HD camera, professional quality audio and lighting, electronic backdrop, recording options and IP-based transmission.

Newswise — Athens, Ga. – Escalating tensions between Washington and Pyongyang over North Korea’s nuclear program have fueled concerns about the possibility of nuclear warfare, and a study from the University of Georgia has found that American medical professionals are woefully unprepared to handle the needs of patients after a nuclear attack.

The researchers analyzed survey responses from over 400 emergency medical personnel in the U.S. and Asia to find out if medical professionals would show up to the site of a nuclear attack and, if they did, whether or not they know the appropriate treatment protocols. They published their findings recently in Frontiers in Public Health.

“I was not surprised that the responses from the emergency medical community were relatively poor in terms of knowledge and attitudes, because that’s what you get with radiation—myths versus reality,” said the study’s lead author, Cham E. Dallas, a professor of health policy and management and director of the Institute for Disaster Management at UGA’s College of Public Health.

Over half of the respondents hadn’t received any formal education on issues related to radiation, and many thought that the immediate medical need after a Hiroshima-sized nuclear detonation would be thermal burns when, in fact, patients are more likely to need treatment for lacerations.

When asked to rank what type of disaster event would make them unwilling to come to work, respondents chose nuclear bomb.

“What we found was that medical personnel were actually more afraid of radiation than they were of biological or chemical events,” said Dallas.

Ironically, responding to radiological or nuclear events has historically presented no risk to health care providers.

This study suggests that emergency medical personnel, despite access to nuclear disaster training, view nuclear events with the same fear and misunderstanding as the general public. Dallas believes this may be because nuclear events are rare, and most providers have no firsthand experience. They fear what they don’t know.

“The interesting thing is these are tough characters. These are people who see trauma and death all the time,” said Dallas. “They’re tough, but not with radiation.”

Dallas also points to Hollywood’s treatment of nuclear events. Most of what people see on television or in movies, he says, is incorrect and reinforces a view that little can be done in the face of a nuclear event. That’s the key assumption Dallas wants to correct.

“As terrible as it might be,” he said, “it’s far more manageable than emergency professionals realize.”

Yet, Dallas is concerned that deep-seated fears may override any disaster training medical personnel might receive. “Even when emergency medical personnel get a minimum amount of training, I’m not certain we’re breaking these patterns,” he said.

Experts agree that a radiological or nuclear event is inevitable, so health care professionals can’t afford to be unprepared, said Dallas, and he urges medical community leaders to offer more radiation and nuclear disaster training addressing the myths related to these events before the threat of attack becomes a reality.

“We’re about to turn the corner on this into a far more likely landscape of nuclear events, and we are not ready,” said Dallas. “It’s a problem.”

“Readiness for Radiological and Nuclear Events among Emergency Medical Personnel”

Note to editors: The following photo of Dallas is available online http://multimedia.uga.edu/media/images/Dallas-Cham_32225-001_1.jpg

Caption: Cham E. Dallas is a professor of health policy and management and director of the Institute for Disaster Management at UGA's College of Public Health.

This release is available online at https://news.uga.edu/releases/article/nuclear-attack/