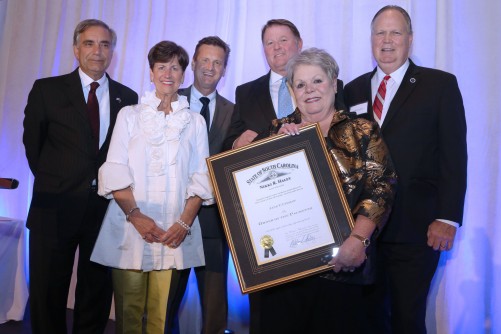 Dr. Upshaw received the award during a community celebration held on June 4, 2015 that recognized the accomplishments of USCB during her 15 years as head of the University. She announced her intention to retire in late 2014 and will leave her post this August.

Having devoted more than 30 years of service to USCB, Dr. Upshaw became the first woman to head a comprehensive university in the University of South Carolina system in 2002. She spearheaded the effort to expand USCB from a two-year college to a fully accredited four-year baccalaureate degree granting institution. In 2004, the first baccalaureate graduates of the University of South Carolina Beaufort received degrees. In that same year, a new 200-acre campus opened at the gateway to Hilton Head Island. Since then, USCB has tripled its academic degree programs, doubled its FTE enrollment, opened its first on-campus housing, joined the NAIA Sun Conference, and fielded conference and national award-winning Sand Shark athletic programs in nine sports. The university’s two campuses serve a diverse student body of more than 1,800 students. Dr. Upshaw played a pivotal role in adding such new academic majors as Computational Science and Nursing, both of which are supported by extensive, state-of-the-art laboratories. Dr. Upshaw served as a guiding force for the Osher Lifelong Learning Institute (OLLI), which today accounts for more than 1,500 members. In total, they participate in more than 1 million course hours annually, which places USCB’s OLLI program in the top 10 in the country. "Jane Upshaw is a dynamic educator and leader. The size of her vision for USCB, the courage of her commitment to grow a small two year college into a regional comprehensive university and her 15 years of continuous leadership at USCB have yielded exceptional results," said Dr. Paula Harper Bethea, Executive Director for the SC Education Lottery and President, USC MyCarolina Alumni Association. "The realization of the dream of a full service baccalaureate university offering affordable access to students in the Lowcountry is her significant and enduring contribution to our state."

Located in the heart of the Carolina Sea Islands, the University of South Carolina Beaufort (USCB) is a baccalaureate member of the USC system, serving the southeast coast of South Carolina and Georgia. Since 2002, USCB has tripled its academic degree programs, doubled its FTE enrollment, opened its first on-campus housing (now serving more than 600), joined the NAIA Sun Conference, and fielded conference and national award-winning Sand Shark athletes in nine sports. The university’s two campuses serve a diverse student body of 1,800 students. The Hilton Head Gateway campus in Bluffton, SC, offers cutting-edge Computational Science and Nursing laboratories, and a broad range of academic degree programs. It is home to Sand Shark athletics. The Historic Beaufort campus, located on Beaufort’s downtown waterfront, houses an innovative baccalaureate Studio Art program in close proximity to Beaufort’s many art galleries. Students enjoy opportunities on Hilton Head Island, including the USCB Center for Event Management and a Coastal Ecology research partnership with Vagabond Cruise. USCB serves 1,500 Osher Lifelong Learning Institute (OLLI) members, who participate in more than 1 million course hours annually, placing OLLI at USCB in the top 10 in the country. The University of South Carolina Beaufort offers students an exceptional place to learn and live in an environment focused on growth, preservation and opportunity.

For more information or to view/download photos from the event CLICK HERE. You may also contact Nikki Troxclair at troxclair@uscb.edu.