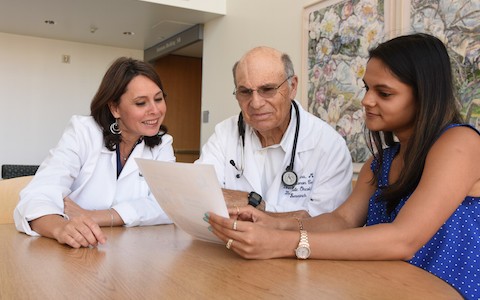 Newswise — DALLAS – May 23, 2017 – Patients with non-small cell lung cancer (NSCLC) often respond to standard chemotherapy, only to develop drug resistance later, and with fatal consequences. But what if doctors could identify those at greatest risk of relapse and provide a therapy to overcome or avoid it?

Researchers at UT Southwestern Medical Center believe they have an answer: a 35-gene signature that identifies tumor cells most likely to develop resistance to treatment. The study, published today in Cell Reports, points to a new pharmacologic approach to target chemo-resistant lung cancer and even prevent development of such resistance in the first place.

“Cancer relapse after chemotherapy poses a major obstacle to treating lung cancer, and resistance to chemotherapy is a big cause of that treatment failure,” said study co-author Dr. John Minna, a Professor and Director of in the Hamon Center for Therapeutic Oncology Research at UT Southwestern. “These findings provide new insights into why resistance develops and how to overcome it.”

Investigators studied mouse and cellular models of NSCLC, a type of lung cancer that the American Cancer Society estimates accounts for 85 percent of all lung cancer cases in the United States.

“Previous studies have shown that up to 70 percent of those cancers develop resistance to standard therapy, such as the platinum-taxane two-drug combo that is often given,” said study senior author Dr. Elisabeth D. Martinez, Assistant Professor of Pharmacology and in the Hamon Center. Both she and Dr. Minna are also members of UTSW’s Harold C. Simmons Comprehensive Cancer Center.

“It’s like a fingerprint for resistance,” Dr. Martinez said, adding that it was predictive in both cells and mouse models.

Next they compared this resistance biomarker using genetic profiles from human tumors in their National Cancer Institute (NCI) lung cancer Specialized Programs of Research Excellence (SPORE) database at UT MD Anderson Cancer Center in Houston. The database contained information on patient outcomes and those who had been treated with the two-drug chemotherapy. The genetic fingerprint for resistance correlated with cancer relapse in NSCLC patients in the database, she said.

Researchers discovered that as cancer cells developed greater resistance to chemotherapy, they progressively made higher amounts of enzymes called JumonjiC lysine demethylases. Dr. Martinez said these enzymes facilitate resistance by changing the expression of – or turning on and off – genes.

Investigators then tested two potential drugs, both JumonjiC inhibitors. One of them, JIB-04, was found by UT Southwestern researchers in the Martinez lab during a small-molecule screen conducted at the National Center for Advancing Translational Sciences’ Chemical Genomics Center in Bethesda, Maryland.

“I believe this is the first report of NSCLC tumors taking advantage of multiple JumonjiC enzymes to reprogram gene expression in order to survive chemotoxic stress. In addition, and this is the most fascinating part: Dr. Dalvi found that greater chemotherapy resistance defines a new susceptibility to the JumonjiC inhibitors,” she said. “The cancer cells develop a new Achilles’ heel that we can hit.”

Because the chemo-resistant cancer cells are dependent on JumonjiC enzymes for survival, inhibiting those enzymes returns cancer cells to mortality and vulnerability to cell death, she explained.

“We think these JumonjiC inhibitors have the potential to be used either to treat tumors once they become resistant to standard therapies, or to prevent resistance altogether,” she said. “In our experiments these inhibitors appear to be much more potent in killing cancer cells than normal cells.”

Other UT Southwestern researchers involved in this work were Dr. Luc Girard, Assistant Professor, Dr. Lei Wang, senior research associate, and Dr. Juan Bayo, postdoctoral researcher, all with the Hamon Center and of Pharmacology; Dr. Rahul Kollipara, a computational biologist in the Eugene McDermott Center for Human Growth and Development; Hyunsil Park, a research associate, and Dr. Brenda Timmons, a research scientist, both of the Hamon Center; Paul Yenerall, graduate student; Dr. Yang Xie, Associate Professor of Clinical Sciences and of Bioinformatics; Dr. Adi F. Gazdar, Professor in the Hamon Center, the Simmons Comprehensive Cancer Center, and Pathology and holder of the W. Ray Wallace Distinguished Chair in Molecular Oncology Research; and Dr. Ralf Kittler, Assistant Professor in the McDermott Center, Pharmacology, and the Simmons Comprehensive Cancer Center as well as a CPRIT Scholar and a John L. Roach Scholar in Biomedical Research. Researchers at MD Anderson Cancer Center, the Perelman School of Medicine at the University of Pennsylvania, and The Ohio State University College of Medicine also contributed.

The study received support from the NCI, the Department of Defense, the Cancer Prevention and Research Institute of Texas (CPRIT), the Friends of the Cancer Center, The Welch Foundation, and an LLS Robert Arceci Scholar Award.