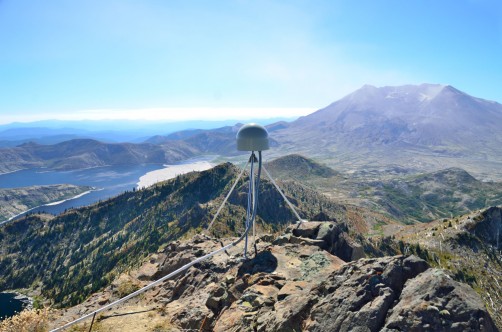 A GPS station near Mount St. Helens in September 2014.

Newswise — Stock traders have long used specialized trackers to decide when to buy or sell a stock, or when the market is beginning to make a sudden swing. A new University of Washington study finds that the same technique can be used to detect gradual movement of tectonic plates, what are called "slow slip" earthquakes. These movements do not unleash damaging amounts of seismic energy, but scientists are just beginning to understand how they may be linked to the Big One. A new technique can quickly pinpoint slow slips from a single Global Positioning System station. It borrows the financial industry's relative strength index , a measure of how quickly a stock's price is changing, to detect slow slips within a string of GPS observations.The paper was published in December in the Journal of Geophysical Research: Solid Earth. "I've always had an interest in finance, and if you go to any stock ticker website there's all these different indicators," said lead author Brendan Crowell, a UW research scientist in Earth and space sciences. "This particular index stood out in its ease of use, but also that it needed no information — like stock volume, volatility or other terms — besides the single line of data that it analyzes for unusual behavior."The study tests the method on more than 200 GPS stations that recorded slow slips between 2005 and 2016 along the Cascadia fault zone, which runs from northern California up to northern Vancouver Island. "Looking at the Cascadia Subduction Zone — which is the most-studied slow slip area in the world — was a good way to validate the methodology," Crowell said. The results show that this simple technique's estimates for the size, duration and travel distance for major slow slip events match the results of more exhaustive analyses of observations along the fault. Discovered in the early 2000s, slow slips are a type of silent earthquake in which two plates slip harmlessly past one another over weeks or months. In Cascadia the slipping runs backward from the typical motion along the fault. A slow slip slightly increases the chance of a larger earthquake. It also may be providing clues, which scientists don't yet know how to decipher, to what is happening in the physics at the plate boundary. Regular earthquake monitoring relies on seismometers to track the shaking of the ground. That doesn't work for slow slips, which do not release enough energy to send waves of energy through the Earth's crust to reach seismometers. Instead, detection of slow slips relies on GPS data. "If you don't have much seismic energy, you need to measure what's happening with something else. GPS is directly measuring the displacement of the Earth," Crowell said.At GPS stations, the same type of sensors used in smartphones are secured to steel pipes that are cemented at least 35 feet (10 meters, or about three stories) into solid rock. By minimizing the noise, these stations can detect millimeter-scale changes in position at the surface, which can be used to infer movement deep underground. Using these data to detect slow slips currently means comparing different GPS stations with complex data processing. But thanks to the efforts of stock traders who want to know quickly whether to buy or sell, the new paper shows that the relative strength index can detect a slow slip from a single one of the 213 GPS stations along the Cascadia Subduction Zone.The initial success suggests the method could have other geological applications."I want to be able to use this for things beyond slow slip," Crowell said. "We might use the method to look at the seismic effects of groundwater extraction, volcanic inflation and all kinds of other things that we may not be detecting in the GPS data." The technique could be applied in places that are not as well studied as the Pacific Northwest, where geologic activity is already being closely monitored. "This works for stations all over the world — on islands, or areas that are pretty sparsely populated and don't have a lot of GPS stations," Crowell said. In related research, Crowell has used an Amazon Catalyst grant to integrate GPS, or geodetic, data into the ShakeAlert earthquake alert system. For really big earthquakes, detecting the large, slow shaking is not as accurate for pinpointing the source and size of the quake. It's more accurate to use GPS to detect how much the ground has actually moved. Tracking ground motion also improves tsunami warnings. Crowell has used the grant to integrate the GPS data into the network's real-time alerts, which are now in limited beta testing. Co-authors of the new paper are Yehuda Bock at Scripps Institution of Oceanography and Zhen Liu at NASA's Jet Propulsion Laboratory. The research was funded by NASA and the Gordon and Betty Moore Foundation.###