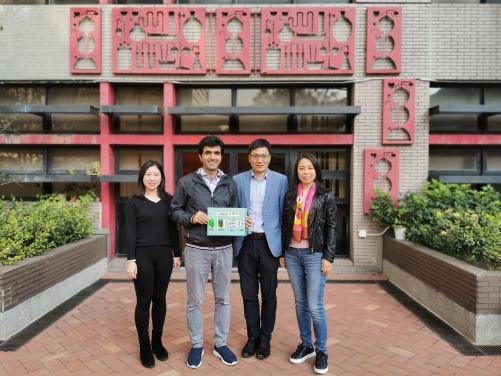 @The University of Hong Kong

@The University of Hong Kong

Workflow of data collection and feature extraction to train the deep learning model.

A research team led by Professor Hongzhe Sun from the Department of Chemistry at the University of Hong Kong (HKU), in collaboration with Professor Junwen Wang from Mayo Clinic, Arizona in the United States (a former HKU colleague), implemented a robust deep learning approach to predict disease-associated mutations of the metal-binding sites in a protein. This is the first deep learning approach for the prediction of disease-associated metal-relevant site mutations in metalloproteins, providing a new platform to tackle human diseases. The research findings were recently published in a top scientific journal Nature Machine Intelligence.

Metal ions play pivotal roles either structurally or functionally in the (patho)physiology of human biological systems. Metals such as zinc, iron and copper are essential for all lives and their concentration in cells must be strictly regulated. A deficiency or an excess of these physiological metal ions can cause severe disease in humans. It was discovered that a mutation in human genome are strongly associated with different diseases. If these mutations happen in the coding region of DNA, it might disrupt metal-binding sites of the proteins and consequently initiate severe diseases in humans. Understanding of disease-associated mutations at the metal-binding sites of proteins will facilitate discovery of new drugs.

The team first integrated omics data from different databases to build a comprehensive training dataset. By looking at the statistics from the collected data, the team found that different metals have different disease associations. A mutation in zinc-binding sites has a major role in breast, liver, kidney, immune system and prostate diseases. By contrast, the mutations in calcium- and magnesium-binding sites are associated with muscular and immune system diseases, respectively. For iron-binding sites, mutations are more associated with metabolic diseases. Furthermore, mutations of manganese- and copper-binding sites are associated with cardiovascular diseases with the latter being associated with nervous system disease as well. They used a novel approach to extract spatial features from the metal binding sites using an energy-based affinity grid map. These spatial features have been merged with physicochemical sequential features to train the model. The final results show using the spatial features enhanced the performance of the prediction with an area under the curve (AUC) of 0.90 and an accuracy of 0.82. Given the limited advanced techniques and platforms in the field of metallomics and metalloproteins, the proposed deep learning approach offers a method to integrate the experimental data with bioinformatics analysis. The approach will help scientist to predict DNA mutations which are associated with disease like cancer, cardiovascular diseases and genetic disorders.

Professor Sun said: "Machine learning and AI play important roles in the current biological and chemical science. In my group we worked on metals in biology and medicine using integrative omics approach including metallomics and metalloproteomics, and we already produced a large amount of valuable data using in vivo/vitro experiments. We now develop an artificial intelligence approach based on deep learning to turn these raw data to valuable knowledge, leading to uncover secrets behind the diseases and to fight with them. I believe this novel deep learning approach can be used in other projects, which is undergoing in our laboratory."

This project was supported by the Research Grants Council (RGC) of Hong Kong and The University of Hong Kong (Norman and Cecilia Yip Professorship in Bioinorganic Chemistry).

Professor Hongzhe SUN and His Team

Professor Hongzhe SUN is a Norman & Cecilia Yip Professor in Bioinorganic Chemistry and Chair Professor of Chemistry at The University of Hong Kong. His research focuses on the biological inorganic chemistry and inorganic chemical biology, especially in metallomics/ metalloproteomics and integration of multiple-omics. Professor Sun has published a series of work in understanding the functions of metalloproteins and overcoming antimicrobial resistance.