Newswise — AMHERST, Mass. – In a clever use of GPS technology, biologists at the University of Massachusetts Amherst have “mapped” the topography of bat teeth as if they were uncharted mountain ranges, in order to better understand how toothy ridges, peaks and valleys have evolved to allow different species to eat everything from hard-shelled insects to blood and nectar.

Using a method based on geographic positioning systems that allowed them to characterize the topography of the bats’ molars in a way similar to how geographers characterize mountain surfaces, the researchers calculated a measure of dental complexity that reflects how “rugged” the surface of the tooth is. They illustrate a trend from relative simplicity of the shearing molars in insect eaters and omnivores to high complexity of the crushing molars in fruit eaters.

Working with field-collected bat skulls, researchers Sharlene Santana and Betsy Dumont of UMass Amherst, with Suzanne Strait of Marshall University, W. Va., compared the structure of molars across 17 species of the New World leaf-nosed bats that specialize in a variety of different diets (insects, fruits, and a combination). It’s well known that mammalian tooth structure and function are strongly related to diet, but this study goes further, the authors explain, to directly measure trends in the relationships among diet, tooth structure, feeding performance and feeding behavior.

They found that the molars of fruit-eating species had sharp outer edges that likely allow them to pierce tough fruit skin and pulp, plus large surfaces with tiny indentations that may help them grind fruit pulp efficiently. By contrast, the molars of insect-eating species were less complex, possibly because of their smoother shearing surfaces. The more simply-shaped teeth would presumably be good for cutting through hard insect exoskeleton. This study is published in the Feb. 16 online issue of the journal Functional Ecology.

Santana and colleagues further tested if, within insect-eating species, higher molar complexity was related to a greater ability to crush insect prey. They fed beetles to field-caught bats, recorded their feeding behavior, then collected fecal samples to measure how well the beetles had been broken down. “We found that insect-eating bats with more complex molars were better at breaking down prey, but how much bats chewed their prey was also important,” Santana and colleagues say.

Like any specialized tool, teeth are designed to match the task, in this case breaking down food. Tooth shapes are very specialized to meet specific functions, Santana explains. “However, little is known about how the structure of teeth in bats from this family evolved in relation to the types of food they eat. Across mammals, there’s also little information about how differences in tooth structure among species relate to how well they perform during feeding.”

“Our study highlights the functional significance of tooth structure and chewing behavior in breaking down natural prey and provides the basis for future studies relating 3D tooth structure to the animals’ ability to break down food, how species divide up food resources and how those divisions evolve,” they point out. This work provides a major step forward in understanding mammalian feeding systems. 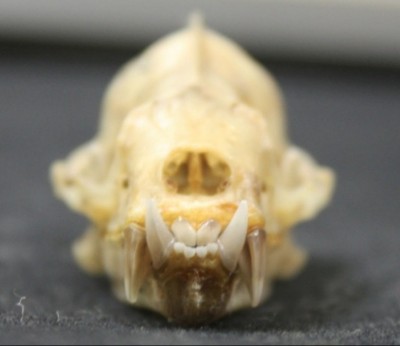 Caption: The front teeth and canines of a bat. 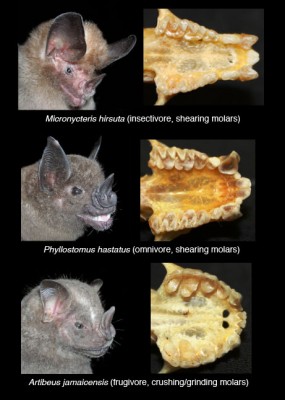 Caption: The faces and upper teeth of bats that eat insects (top), fruit (bottom) and a combination of fruit and insects (middle).