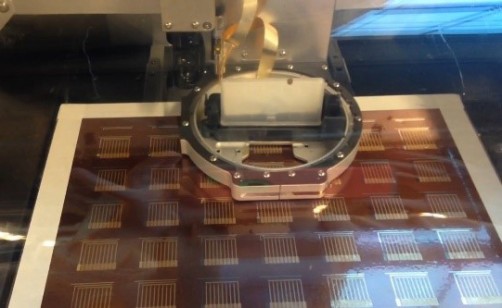 An inkjet printer layers gold nanoparticle ink constructing a batch of biosensors capable of forming the detection platform for a breast cancer protein in blood. The printer can be observed in this video depositing ink in a specific pattern to construct the sensor chip.

Newswise — NIBIB-funded researchers have created a novel, low-cost biosensor to detect HER-2, a breast cancer biomarker in the blood, allowing for a far less invasive diagnostic test than the current practice, a needle biopsy. Scientists at the Universities of Hartford and Connecticut and funded in part by NIBIB, combined microfluidic technology with diagnostics, including electrochemical sensors and biomarkers, into a powerful package that can give results in about 15 minutes.

The biosensor chip was partially constructed using an inkjet printer, which layers nanoparticle inks onto a plastic surface to create an array of electrodes. The printed biosensor chip was deposited into a pre-fabricated microfluidic device which directs fluids to flow in a controlled manner. Colleen Krause, Ph.D., in collaboration with James Rusling, Ph.D., designed this biosensor to measure levels of the protein Human Epidermal Growth Factor Receptor 2 (HER-2), which when found at abnormal levels indicate a specific breast cancer type. Knowing the type helps determine treatment.

An inkjet printer layers gold nanoparticle ink constructing a batch of biosensors capable of forming the detection platform for a breast cancer protein in blood. The printer can be observed in this video depositing ink in a specific pattern to construct the sensor chip. Credit: Colleen E. Krause

The patient’s blood sample flows through the microfluidic device and the sensor chip, which is coated with antibodies. The antibody captures and immobilizes HER-2 proteins found within the sample.  Researchers described HER-2 as being the white filling of an Oreo sandwiched between two antibodies -- the chocolate cookies -- on the sensor chip. Each cookie layer is an antibody specific to recognizing HER-2. A chemical solution flows over the “HER-2 Oreo” to generate a measurable electrical signal that correlates to the amount of HER-2 protein present in the sample.

The CDC has reported that collectively, all breast cancers make up the most common cancer among women, regardless of ethnicity. It can take up to two weeks for a patient to receive a diagnosis following a biopsy exam. “Less invasive, more accessible, and faster diagnostic tools like this biosensor are essential to improving healthcare,” said Seila Selimovic, Ph.D., director of the NIBIB programs in Biosensors and Physiological Detectors program. “As biosensors continue to progress it is important to keep in mind diagnostic tools are only helpful when accurate. This biosensor works in the clinically relevant range and has one of the lowest reported HER-2 detection limits, so fewer false positives and negatives will occur.”

Typically, breast cancer is initially diagnosed through a mammogram or ultrasound and followed by an invasive needle biopsy, where tissue or fluid is removed from the suspicious area and examined under a microscope. Clinicians identify specific biomarkers from the biopsy and determine breast cancer type to develop a treatment strategy. The FDA recognizes HER-2 as one of the only breast cancer biomarkers. Recent reports suggest monitoring HER-2 levels in the blood may be useful throughout and after treatment for disease progression status. While still in the early stage of development, researchers said the advancement of biosensors could yield the opportunity for non-invasive breast cancer testing.

As medicine and biosensors progress, researchers foresee clinicians testing multiple biomarkers to achieve a more accurate diagnosis. The biosensor already has the capability of being modified to detect multiple biomarkers in the blood. Further efforts are directed at decreasing the size of the device, using printed circuit boards to construct a portable electrochemical unit like that of a glucose meter, which can fit in your palm. In their on-going efforts the researchers believe it is vital to initiate partnerships with the medical community now to get input on the design of the developing technology.

The work was supported by grants from NIBIB (EB16707), The University of Hartford start-up funds, and Vincent B. Coffin Grant.