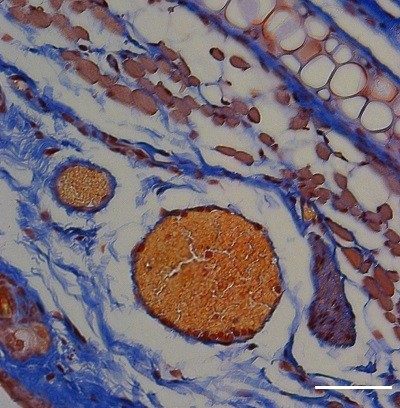 An orange-red dye shows that blood clots formed in a mouse ear in which thrombin was released from light-triggered RBCs. Scale bar, 50 μm.

Newswise — Protein therapies are often more potent and selective toward their biochemical targets than other types of drugs, particularly small molecules. However, proteins are also more likely to be quickly degraded by enzymes or cleared from blood by the kidneys, which has limited their clinical use. Now, researchers reporting in ACS Central Science have engineered red blood cell (RBC) carriers that release therapeutic proteins when stimulated by light, with the help of a honey bee peptide.

Because protein drugs are unstable in the body, they must be given at high levels, which can cause side effects. Scientists have tried to protect protein therapies from degradation by encapsulating them in carriers, such as liposomes, nanoparticles and RBCs. But it has been challenging to make the carriers release their cargo at the appropriate place and time. Brianna Vickerman, David Lawrence and colleagues wanted to engineer RBCs to release therapeutic proteins at specific regions of the body when triggered by certain wavelengths of light.

The researchers embedded a peptide, called melittin, into the cell membrane of RBCs. A component of European honey bee venom, melittin normally causes RBCs to rupture. But the team modified the peptide so that it would do so only when illuminated by a specific wavelength of light. As a proof of concept, the researchers loaded thrombin –– a blood-clotting enzyme that is used to prevent excessive bleeding –– into the engineered RBCs and injected them into mice. They then shone a light on a small region of each mouse’s ear and examined sections of the tissue. The analysis showed thrombin-related blood clotting only at the illuminated sites. The strategy could prove useful for the light-triggered release of protein, peptide and nucleic acid therapeutics from a variety of lipid-based carriers, the researchers say.

The authors acknowledge funding from the Eshelman Institute for Innovation and the American Heart Association.