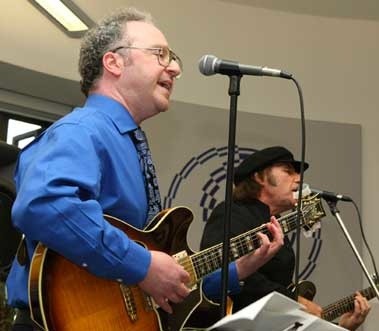 Dalhousie University math professor Jason Brown performed at the launch for his book, Our Days Are Numbered.

Newswise — The whimsical music of The Beatles’ Strawberry Fields Forever was made possible using production and editing techniques that were groundbreaking for its time. Beatles’ fans probably wouldn’t have even noticed that two takes of differing pitch and speed were spliced together until Dalhousie University's Sherlock of Rock—math professor Jason Brown—went in to investigate.

John Lennon wrote Strawberry Fields Forever in 1966 while vacationing in Spain. Upon returning to the studio, the song was recorded in a number of takes. Normally this wouldn’t be such a big deal, except that this time, the two takes Lennon liked best were in two different keys and two different tempos.

Beatles producer George Martin was faced with quandary, limited as he was by the lack of sophisticated recording technology at the time. With today’s studio bells and whistles it’s far easier adjust pitch and tempo independently, but back then Martin was only able to select the speed of the recording.

Strawberry Field was the name of an orphanage in Liverpool which was located near John Lennon's childhood home. He apparently always liked the name.

Speeding up one take would increase both the pitch and the tempo while slowing the speed would decrease both the pitch and the tempo of the other take. Sir George would eventually use a combination of speeding up take one and slowing down take two (or for the die-hard fans, takes 7 and 26 respectively) splicing them together to compensate for the differences.

An avid guitarist and a professor in Dalhousie’s math department, Dr. Brown is a big fan of The Fab Four. Using mathematical calculations to do his detective work, he attracted international attention in 2008 when he solved the mystery behind the opening chord of A Hard Day’s Night. Now, along with Robert Dawson, math professor at Saint Mary's University, he's plumbing the secrets of Strawberry Fields Forever in a new paper published by the Canadian Mathematical Society.

The average listener would most likely not be able to detect the edit in Strawberry Fields Forever, unless they possessed a finely tuned sense of rhythm. “The edit was an approximation that worked for most people. It represents the clever handling of a complex problem. The end result may not have been perfect, but it was certainly good enough,” says Dr. Brown.

Given the rhythmic and mathematical nature of music, Dr. Brown was able to derive a mathematical formula to represent the musical problem facing George Martin. The formula confirms the editing—it was not a perfect match, but it worked.

Using the equation, the only way to make the song completely rhythmically accurate would have been to slow it down to a tempo of about 43 beats per minute. This would have taken the four-minute-long original recording and stretched it into an eight-minute dirge.

Dr. Brown’s paper can be read in full in the Volume 43, No. 1 February 2011 edition of CMS Notes (PDF), a six times per year publication by the Canadian Mathematical Society.