Rheumatoid arthritis patients who use tumor necrosis factor inhibitors (called Anti-TNFs) to control their disease-related inflammation also have a decreased risk for heart attacks, according to research findings presented this week at the American College of Rheumatology Annual Meeting in San Diego. 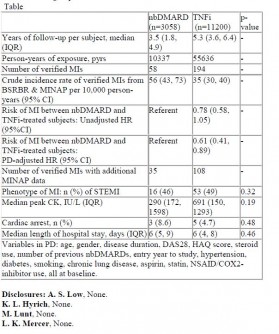 Newswise — SAN DIEGO — Rheumatoid arthritis patients who use tumor necrosis factor inhibitors (called Anti-TNFs) to control their disease-related inflammation also have a decreased risk for heart attacks, according to research findings presented this week at the American College of Rheumatology Annual Meeting in San Diego.

Rheumatoid arthritis is a chronic disease that causes pain, stiffness, swelling, and limitation in the motion and function of multiple joints. Though joints are the principal body parts affected by RA, inflammation can develop in other organs as well. An estimated 1.3 million Americans have RA, and the disease typically affects women twice as often as men.

Patients with RA also have an increased risk of heart attacks, possibly due to the inflammation associated with the disease. Researchers recently investigated whether or not anti-TNFs, which help to control RA inflammation, would lower the risk and severity of heart attacks in these patients compared to traditional, non-biologic disease-modifying antirheumatic drugs, or DMARDs.

“The British Society for Rheumatology Biologics Register was established in 2001 to monitor the long-term safety of biologic therapies in patients with rheumatoid arthritis. Information has been collected on over 20,000 UK patients, including data on all hospital admissions and deaths. Whilst established to examine possible safety issues with biologic therapies, it provides the opportunity to look at additional benefits beyond the direct effect on disease severity,” explains William Dixon, MD, MRC clinician scientist/ senior clinical lecturer and honorary consultant rheumatologist; Arthritis Research UK Epidemiology Unit, The University of Manchester; and an investigator in the study. “Linkage to a national audit of myocardial infarctions [heart attacks] allowed us to examine not only the rate of heart attacks, but uniquely whether the severity of heart attacks was different following biologic treatment. Better control of inflammation with biologic therapy might reduce not only the rate of heart attacks, but potentially also affect the size of myocardial infarctions.”

The researchers concluded that the RA patients using biologic agents to manage their inflammation had a lower risk of heart attacks than those who used traditional DMARDs. However, the severity of the heart attacks between the two groups was statistically similar.

“Rheumatologists can be reassured that treatment of active rheumatoid arthritis with anti-TNF therapy may lead not just to an improvement in joint symptoms, but also a reduction in the rate of myocardial infarctions in the medium term,” says Dr. Dixon

Patients should talk to their rheumatologists to determine their best course of treatment.

The American College of Rheumatology is an international professional medical society that represents more than 9,000 rheumatologists and rheumatology health professionals around the world. Its mission is to advance rheumatology. The ACR/ARHP Annual Meeting is the premier meeting in rheumatology. For more information about the meeting, visit http://www.acrannualmeeting.org/ or join the conversation on Twitter by using the official hashtag: #ACR13

Editor’s Notes: Dr. Low will present this research during the ACR Annual Meeting at the San Diego Convention Center at 5:00 PM on Tuesday, October 29 in 6 D. Dr. Dixon will be available for media questions and briefing at 8:30 AM on Monday, October 28 in the on-site press conference room, 27 AB.

Background/Purpose: Subjects with rheumatoid arthritis (RA) are at increased risk of myocardial infarction (MI) compared to subjects without RA, with the increased risk potentially driven by inflammation. Anti tumour necrosis factor (TNFi) drugs may modulate the risk and severity of the MI. The aim of this analysis was to compare the risk and severity of MI in subjects treated with TNFi to non-biologic drugs (nbDMARDs) using linked data from BSRBR-RA (an ongoing prospective study of the safety of biologic therapy in RA) and the Myocardial Ischaemia National Audit Project (MINAP), a national database of hospitalisations with MI in England and Wales.

Methods: This analysis included subjects with RA starting TNFi (etanercept, infliximab, adalimumab) and a biologic-naïve comparator cohort receiving nbDMARDs recruited between 2001-2008; all followed via physician and patient questionnaires and flagged with the national death register. All subjects were also linked to MINAP using deterministic matching which provided both additional events and further event data regarding MI severity. Events from both datasets were verified using the American Heart Association/European Society of Cardiology criteria for MI with additional criteria of thrombolysis/angioplasty and MI listed as the underlying cause of death on death certificates, coded using International Classification of Diseases 10. When estimating incidence of MI, subjects were censored at first MI, death, 90 days following discontinuation of TNFi, last physician follow-up or 04/20/2010, whichever came first. The risk of MI was compared between subjects receiving nbDMARDs and TNFi using a Cox regression model, adjusted on deciles of propensity scores (PD) (Table). In a subset of MIs with additional event data from MINAP; MI phenotype and severity (using surrogates: cardiac arrest, peak creatine kinase (CK) levels and length of hospital stay) were compared between treatment groups using descriptive statistics. 3

Results: Using the linked data, a total of 252 verified first MIs were analysed: 58 in 3058 nbDMARD subjects and 194 in 11200 TNFi-treated subjects. The PD-adjusted hazard ratio (HR) of MI in TNFi referent to nbDMARD was 0.61 (95%CI 0.41, 0.89). The estimate was unchanged when all follow-up time following first dose of TNFi was included. There were 143 MIs (nbDMARD: 35, TNFi: 108) with additional MINAP data. No statistical differences were observed in MI severity when compared between nbDMARD and TNFi-treated subjects, although there was a trend towards higher peak CK levels recorded in TNFi-treated subjects (Table).

Conclusion: Subjects receiving TNFi drugs had a decreased risk of MI compared to subjects receiving nbDMARDs over the medium term which could relate to attributes of the drug itself or better overall disease control. The severity of MIs at presentation appears to be similar between both treatment groups.