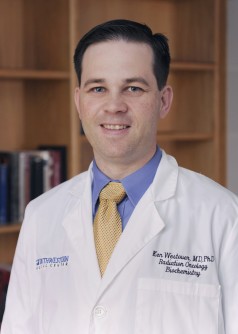 Newswise — DALLAS – July 28, 2014 – UT Southwestern Medical Center cancer researchers have found a molecule that selectively and irreversibly interferes with the activity of a mutated cancer gene common in 30 percent of tumors.

The molecule, SML-8-73-1 (SML), interferes with the KRAS gene, or Kirsten rat sarcoma viral oncogene homolog. The gene produces proteins called K-Ras that influence when cells divide. Mutations in K-Ras can result in normal cells dividing uncontrollably and turning cancerous. These mutations are particularly found in cancers of the lung, pancreas, and colon. In addition, people who have the mutated gene are less responsive to therapy.

Researchers have unsuccessfully tried to develop a drug to inhibit K-Ras for some 30 years.

“RAS proteins including KRAS have not been ‘druggable’ for many decades despite a lot of effort from academia and industry,” said senior author Dr. Kenneth Westover, Assistant Professor of Radiation Oncology and Biochemistry, and a member of UT Southwestern’s Harold C. Simmons Cancer Center.

“We are exploring irreversible inhibitors as a solution, which we believe may pave the way for the development of KRAS-targeted compounds with therapeutic potential and perhaps compounds that target other RAS family proteins involved in cancer,” Dr. Westover said.

Dr. Westover works as both a clinician as a member of the Lung Radiation Oncology Team at the Simmons Cancer Center, and as a researcher. The Westover laboratory investigates the molecular basis of cancer with an eye toward developing compounds that perturb cancer biology, and therefore have potential to become therapies. Dr. Westover’s lab has been particularly targeting KRAS because this gene is the most commonly mutated oncogene in cancer.

Building on previous work, Dr. Westover and fellow investigators used a technique called X-ray crystallography to determine what happens when SML is added to KRAS carrying the G12C mutation, a hallmark of tobacco-associated lung cancer and present in 25,000 of the new cases of lung cancer in the U.S. annually.

Researchers found that SML irreversibly binds to mutated KRAS, making the KRAS G12C inactive. SML competes with molecules that KRAS naturally binds to, called GTP and GDP, and is not removable, even when GTP and GDP are present at very high levels. This attribute is what makes SML an irreversible inhibitor – neither GDP nor GTP are able to knock it off and take its place.

The researchers then used a technique called mass spectrometry to determine that SML is not only irreversible, but selective – binding only to KRAS and not the roughly 100 other members of the RAS protein family that have very similar structures.

“We believe SML may be the first irreversible and selective inhibitor of KRAS,” said Dr. Westover, who was recruited to UT Southwestern with funds from the state-funded Cancer Research and Prevention Institute of Texas. “As a next step, we are improving the SML compound to facilitate studies involving living cancer cells, and eventually animals and humans.”

The research, published online in the journal Proceedings of the National Academy of Sciences, was supported by funds from the Cancer Research and Prevention Institute of Texas, and The Welch Foundation.

UT Southwestern’s Harold C. Simmons Cancer Center is the only National Cancer Institute-designated cancer center in North Texas and one of just 66 NCI-designated cancer centers in the nation. The Harold C. Simmons Cancer Center includes 13 major cancer care programs with a focus on treating the whole patient with innovative treatments, while fostering groundbreaking basic research that has the potential to improve patient care and prevention of cancer worldwide. In addition, the Center’s education and training programs support and develop the next generation of cancer researchers and clinicians.