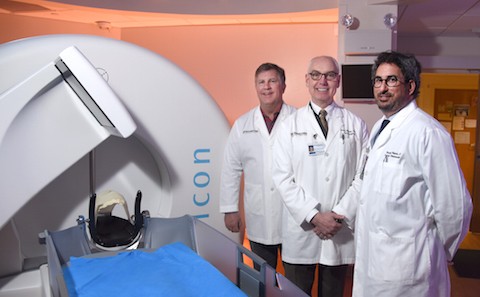 Newswise — DALLAS – March 27, 2017 – Patsy Whittenberg made the six-hour drive from the Texas Panhandle to UT Southwestern Medical Center in Dallas to take advantage of a first for Texas – the latest in Gamma Knife surgery ­that better protects surrounding brain tissue and offers greater comfort without the need for head restraints.

“This machine was a blessing for me. I had my eyes closed and didn’t even know when I entered the machine,” said Mrs. Whittenberg, 77, whose sinus tumor was treated. “No pain, no side effects.”

For decades, Gamma Knife radiosurgery has been the gold standard for cancer patients with inoperable brain tumors or brain metastases. But head restraints required by previous models were not only a bit intimidating, but couldn’t be used daily or left on for extended periods, restricting how treatments were delivered.

“To make the treatment as accurate as possible, I had to lie absolutely still. I couldn’t move even an itty-bitty bit,” said Mrs. Whittenberg.

“Our new Gamma Knife Icon, the sixth and latest generation of the device, has been specifically designed to deliver a highly effective dose of radiation with the lowest possible radiation exposure to the surrounding normal brain and cranial nerves,” said Dr. Bruce Mickey, who directs the Annette G. Strauss Center for Neuro-Oncology, part of the O’Donnell Brain Institute.

The technology allows doctors to spread out the radiation treatments in smaller doses, known as fractionated treatments.

“Some targets in patients are located near, or even intermingled with, normal tissue, making radiosurgery difficult to tolerate. Fractionating the treatment can be useful in these circumstances,” said Dr. Timmerman, Professor of Radiation Oncology and Neurological Surgery, and a member of both the O’Donnell Brain Institute and the Simmons Cancer Center.

The new technology also allows distributive treatments, which are used for treating multiple, separate targets. Only a subset is treated on one day, leaving the rest to be treated on another day.

The updated Gamma Knife Icon offers several other advantages, including expanded treatment areas that include the eyes, face, and upper neck. The Gamma Knife Icon can be particularly advantageous for patients with brain metastases, who are increasingly being treated with radiosurgery instead of whole brain radiation.

The updated Gamma Knife Icon offers several other advantages, including an expanded treatment area that includes the eyes, face and upper neck, and the ability to deliver staged treatments where only a portion of the total target is treated.

Mrs. Whittenberg previously had skin cancer treatments that left her with skin grafts in several areas of her head, making her a good candidate for the new technology. Icon enabled doctors to treat her sinus tumor without affecting the brain or the skin grafts. Her sinus tumor, called benign meningioma, is a type of brain tumor that is typically slow-growing but can cause headaches, hearing loss, changes in vision, and seizures.

“My doctors were really concerned about my safety and comfort. They treated me like I’m their mom or grandmother,” said Mrs. Whittenberg, who together with her husband, Don, has six children and 17 grandchildren. “The treatment was finished at noon, so we had lunch and then we drove home the same day.”

Advantages of the Gamma Knife Icon

UT Southwestern, one of the premier academic medical centers in the nation, integrates pioneering biomedical research with exceptional clinical care and education. The institution’s faculty includes many distinguished members, including six who have been awarded Nobel Prizes since 1985. The faculty of almost 2,800 is responsible for groundbreaking medical advances and is committed to translating science-driven research quickly to new clinical treatments. UT Southwestern physicians provide medical care in about 80 specialties to more than 100,000 hospitalized patients and oversee approximately 2.2 million outpatient visits a year