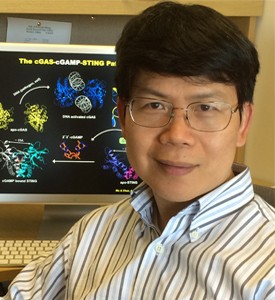 Dr. Chen, who holds the George L. MacGregor Distinguished Chair in Biomedical Science, is a pioneer in deciphering the mechanisms of cell signaling, inflammation, and innate immunity – the body’s first, generalized response to infection.

“I am extremely honored that the discoveries from our laboratory are being recognized by our scientific colleagues. I’m grateful for the hard work and dedication of the talented people in the lab and the strong support from UT Southwestern,” said Dr. Chen, who is also a member of the Center for Genetics of Host Defense.

Early in his career, Dr. Chen uncovered a new, unexpected role for ubiquitin, a small protein, showing that it activates proteins important in immune regulation and other essential cellular functions. In subsequent work, he found that the cell’s energy-producing machines, the mitochondria, contribute to the body’s immune response and he identified MAVS, a mitochondrial protein essential for immune defense against many RNA viruses such as influenza, West Nile and hepatitis C. More recently, Dr. Chen discovered a new pathway called the cGAS pathway, which activates the immune system in response to microbial and self DNA.

“We are delighted to see Dr. Chen receive this very special recognition of his enormously important discoveries that have advanced understanding of the fundamental mechanisms of cell response to viral infections,” said Dr. Daniel K. Podolsky, President of UT Southwestern and holder of the Philip O’Bryan Montgomery, Jr., M.D. Distinguished Presidential Chair in Academic Administration and the Doris and Bryan Wildenthal Distinguished Chair in Medical Science.

Dr. Chen will present his award lecture, “Enemy within – immune and autoimmune responses to cytosolic DNA and RNA,” at next year’s annual ASBMB meeting in Boston as part of the honors.

Earlier this year, Dr. Chen was elected to the National Academy of Sciences (NAS), one of the highest honors in American science. UT Southwestern has 21 NAS members on its faculty, placing it among the group of academic medical centers with the most NAS members. In 2012, Dr. Chen received the NAS Award in Molecular Biology.

In May, Dr. Chen was inducted into The Academy of Medicine, Engineering and Science of Texas (TAMEST). In 2007, Dr. Chen received TAMEST’s Edith and Peter O’Donnell Award in Science, and, in 2005, the Robert A. Welch Foundation Norman Hackerman Award in Chemical Research.