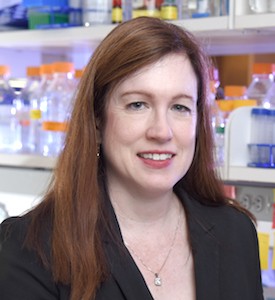 A research team led by Dr. Lora Hooper, Chair of Immunology at UT Southwestern and an Investigator of the Howard Hughes Medical Institute, has determined that a backup pathogen-fighting system uses autophagy’s cellular machinery to deliver protein weapons to the front lines – the cell surface – in the fight against bacterial attack.

“This is the first example of this alternative pathway being used in immune defense in any kind of animal,” Dr. Hooper said of the mouse study, published online today in Science.

The Centers for Disease Control and Prevention estimates that about 3 million U.S. residents suffer from inflammatory bowel disease with that number about equally split between Crohn’s disease and ulcerative colitis. The two conditions are characterized by chronic inflammation of the gastrointestinal tract.

Dr. Shai Bel, a postdoctoral researcher in Dr. Hooper’s laboratory and the lead author of the study, said the significance of the study’s findings rest on understanding the complex, dynamic ecosystem in the intestines.

“Our guts are teeming with trillions of bacteria that do a great service by helping us digest food, but they can also cause illness if able to invade our tissues,” Dr. Bel said. “To keep helpful bacteria at a safe distance, cells lining the intestine produce antimicrobial proteins – tiny weapons on the cell surface that target and kill bacteria that are threatening to invade intestinal cells.”

Dangerous pathogens, such as those that cause food poisoning, have developed advanced weapons systems aimed at overcoming that first line of defense, he continued. The secondary pathway seen in this study appears to send reinforcements to the battle lines on the cell surface, he added.

Classical autophagy – for which Dr. Yoshinori Ohsumi of Japan was awarded the 2016 Nobel Prize in Physiology or Medicine – is a system cells use to degrade and recycle unneeded components. While the backup defense system observed in this study is not part of the classical autophagy pathway, it appears to use some of autophagy’s cellular machinery. “This substitute pathway uses classical autophagy machinery to make and transport protein weapon reinforcements to the cell surface after the first line of defense fails,” said Dr. Hooper, also a Professor of Immunology and Microbiology with an additional appointment in the Center for the Genetics of Host Defense.

To study the backup defense system, the researchers used mice engineered by Boston collaborators to have the mutation seen in many human Crohn’s patients and then exposed these mice to Salmonella, a foodborne pathogen.

“When intestinal cells from normal, wild-type mice encounter Salmonella, their protein weapons travel through this detour, or backup pathway, and still make it to the battle lines on the cell surface,” said Dr. Hooper, who holds the Jonathan W. Uhr, M.D. Distinguished Chair in Immunology and is a Nancy Cain and Jeffrey A. Marcus Scholar in Medical Research, in Honor of Dr. Bill S. Vowell. “In mice with this Crohn’s mutation, the detour pathway is blocked and unable to kill bacteria. In agreement with these findings, our collaborators found that the mice got sicker when exposed to another foodborne pathogen.”

The researchers observed abnormalities in the intestinal lining of the mice that resembled abnormalities in protein packaging seen in the cells of Crohn’s patients, she said. However, she stressed that Crohn’s disease is a complicated condition, and this study did not involve any human testing.

The work received support from the National Institutes of Health, the Burroughs Wellcome Fund, the Welch Foundation, and the Howard Hughes Medical Institute.

This news release is available on our website at www.utsouthwestern.edu/newsroom