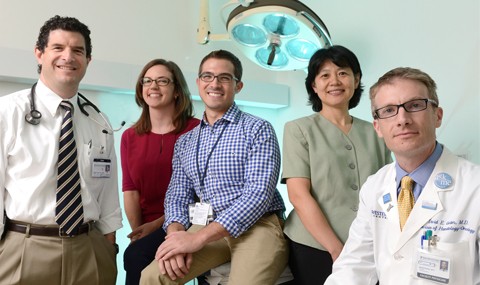 Newswise — DALLAS – Feb. 9, 2015 – The common practice of excluding patients with a prior cancer diagnosis from lung cancer clinical trials may not be justified, according to a study by researchers from UT Southwestern Medical Center.

Having previously had cancer did not impact clinical outcomes in advanced lung cancer patients and these patients therefore should be considered for inclusion in clinical trials seeking new therapies, according to the study, appearing in the Journal of the National Cancer Institute.

“When it comes to clinical trial eligibility, a history of prior cancer should not count against you,” said senior author Dr. David Gerber, Associate Professor of Internal Medicine in the Division of Hematology and Oncology in the Harold C. Simmons Comprehensive Cancer Center. “For patients with advanced lung cancer, previous cancer does not adversely affect survival, regardless of the type, stage, or timing of the prior cancer.”

The National Cancer Institute (NCI) estimates that more than 14 million people in the U.S. have a history of cancer. Currently fewer than 5 percent of adults with cancer in the U.S. participate in clinical trials.

“Previous research by our team found that a substantial proportion of lung cancer patients − up to 18 percent − are excluded from clinical trial participation solely due to a history of prior cancer.  This long-standing and widespread practice reflects concerns that lung cancer patients with a prior cancer would have worse outcomes,” said Dr. Gerber, Co-Director of the Lung Cancer Disease Oriented Team and co-leader of the Experimental Therapeutics Program. “In the current study, these patients’ outcomes were as good – or even better than- those with no previous cancer diagnosis.”

“Modifying the policy for clinical trial inclusion could lead to faster accrual of patients, higher trial completion rates, and more generalizable trial results that can help a greater number of patients, ultimately leading to better treatments,” said co-author Dr. Ethan Halm, Chief of the William T. and Gay F. Solomon Division of General Internal Medicine, and Chief of the Division of Outcomes and Health Services Research in the Department of Clinical Sciences at UT Southwestern. Dr. Halm is holder of the Walter Family Distinguished Chair in Internal Medicine in Honor of Albert D. Roberts, M.D.

The researchers studied 102,929 patients over age 65 who were diagnosed with stage IV lung cancer – the most advanced stage − from 1992 to 2009. Of these patients, 14.7 percent had a history of prior cancer.

In the study, about three-quarters of previous cancers (76 percent) were diagnosed at stages I, II or III, and most were diagnosed less than five years prior to the lung cancer diagnosis. Among women, the most common prior cancers were breast, gastrointestinal, and gynecologic. For men, the most common prior cancers were prostate, other genitourinary, and gastrointestinal.  Patients with prior cancer had 10 percent better overall survival and 20 percent better lung cancer-specific survival than those with no previous cancer diagnosis.

Although the study was not designed to determine why prior cancer was associated with superior survival, the research team hypothesizes that the apparent benefit most likely reflects lead-time bias rather than a biologic advantage.  “The clinical and radiographic surveillance related to the prior cancer may result in earlier diagnosis of the stage IV lung cancer.  This shift leads to longer documented survival times,” said Dr. Gerber.

UT Southwestern’s Harold C. Simmons Comprehensive Cancer Center is one of just 68 NCI-designated cancer centers in the nation. The Simmons Cancer Center includes 13 major cancer care programs with a focus on treating the whole patient with innovative treatments, while fostering groundbreaking basic research that has the potential to improve patient care and prevention of cancer worldwide. In addition, the Center’s education and training programs support and develop the next generation of cancer researchers and clinicians.

In addition, the Simmons Cancer Center is among only 30 U.S. cancer research centers to be named a National Clinical Trials Network Lead Academic Participating Site, a prestigious new designation by the NCI, and the only Cancer Center in North Texas to be so designated. The designation and associated funding is designed to bolster the cancer center’s clinical cancer research for adults and to provide patients access to cancer research trials sponsored by the NCI, where promising new drugs often are tested.

UT Southwestern, one of the premier academic medical centers in the nation, integrates pioneering biomedical research with exceptional clinical care and education. The institution’s faculty includes many distinguished members, including six who have been awarded Nobel Prizes since 1985. Numbering approximately 2,800, the faculty is responsible for groundbreaking medical advances and is committed to translating science-driven research quickly to new clinical treatments. UT Southwestern physicians provide medical care in 40 specialties to about 92,000 hospitalized patients and oversee approximately 2.1 million outpatient visits a year.