This animation offers a 360-degree view of the exterior and interior of the three-dimensional, volumetric circuit produced by UTEP’s Electromagnetics (EM) Lab. 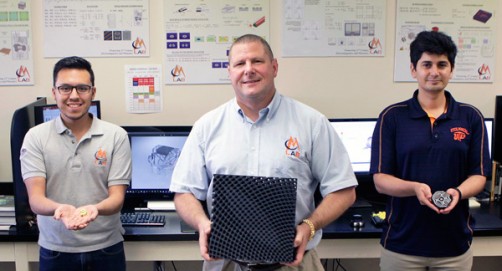 Newswise — Raymond C. Rumpf, Ph.D., and his EM Lab team are motivated by extreme challenges that others may consider to be impossible.

The Schellenger Professor in Electrical Research in The University of Texas at El Paso’s College of Engineering leads the EM Lab, a space dedicated to pioneering high-risk, high-payoff concepts in electromagnetics and photonic technologies that are enabled by 3D printing.

“We keep a sign above our trash can that says, ‘Incremental thoughts’ on it with an arrow pointing down,” Rumpf said in jest. “If we think it can be done, we are probably not interested.”

But there’s nothing funny about the discoveries that have been made within the lab’s confines. Since 2010, Rumpf and his team of researchers have seen several revolutionary projects to fruition, including development of an ultra-high power frequency selective surface and one of the world’s thinnest dielectric antennas. In addition, the team has recorded what is likely the tightest bend of an optical beam. However, the EM Lab’s latest breakthrough is its most ambitious and far-reaching yet. Earlier this year, researchers completed the first true three-dimensional, volumetric circuit using a fully automated process. It is a feat that Rumpf said may change the paradigm of how products with electrical functionality are designed and manufactured.

“This is a very significant step and potentially disruptive achievement,” Rumpf said. “There are many other large research groups that have been chasing this. It’s what everybody in this field is working toward and talking about, yet nobody has yet achieved it. It’s sort of the holy grail for 3D printed circuits, and it was accomplished here at UTEP.”

Research on the 3D/volumetric circuit technology was borne out of the notion that a three-dimensional circuit offers more freedom to make circuits smaller, lighter and more efficient. 3D printing allows them to be manufactured into arbitrary form factors that can be integrated into any object or surface. The concept offers many opportunities for the manufacturing industry. Rumpf said this recent breakthrough came as a result of years of research and assembling all of the tools and processes it would take to accomplish.

Accomplishing these achievements took the work of a team of EM Lab researchers — Gilbert Carranza, Ubaldo Robles, Cesar Valle and Rumpf himself.

Carranza, a doctoral student, began his research in the EM Lab as an undergraduate senior two years ago. When Rumpf presented the challenge of finding a way to design circuits in three dimensions, Carranza jumped at the opportunity. He used an open-sourced CAD software to integrate his custom functions that allowed the EM Lab to design true 3D circuits.

“I built a custom tool that allows us to place electric components in any position and in any orientation," Carranza said. "We can route the electrical interconnects throughout all three dimensions following smooth paths.”

Carranza worked for a year on the software to produce the first version.

“We couldn’t go anywhere beyond that,” Carranza said. “We didn’t have the necessary tool to actually translate my design into something that could be read by our 3D printer.”

This animation offers a 360-degree view of the exterior and interior of the three-dimensional, volumetric circuit produced by UTEP’s Electromagnetics (EM) Lab. Video: Courtesy of EM Lab

Enter Robles and Valle. The pair are also doctoral students and EM Lab researchers who spend many hours in the 3D printing room. Much of the last year was spent trying to bridge the gap between Carranza’s software and the printing process. At the beginning of summer, Robles successfully completed an interface that could convert the circuit design into code that the printer can read to build the circuit in one seamless step. From there, Valle and Carranza fine-tuned the process and produced the world’s first 3D/volumetric circuit using their automated process.

“Getting the CAD, code generator, and 3D printer to play along well together proved the most difficult step,” Valle said. “Typically, when you make a circuit, it’s two steps. You start with a thin sheet of plastic. On top of that, you form metal traces, then put electrical components onto that. What our tool does that is unique is it combines these processes, and it does it in three dimensions with complete design freedom. We are now able to load 3D files, hit 'run' and out comes the part. Literally 'File,' 'Print.'”

Rumpf said there is a huge array of applications for this technology, which was developed using funding from the U.S. Army Research Laboratory at Aberdeen Proving Ground, Maryland, and the Air Force Research Laboratory at Wright-Patterson Air Force Base, Ohio. With the ability to build circuits into any shape or surface, electronics can be built into anything with virtually no added size or weight.

“We can make circuits in any form or fashion,” Rumpf said. “You could put circuits in munitions, in eyeglasses, in shoes, and even in coffee mugs. You can be at a restaurant drinking coffee and, when the liquid gets down to a certain level the server gets notified before you have to say anything. It’s about making electronics ubiquitous in many different things.”

He added that another aspect of this innovation will be the ability for small businesses that can buy a 3D printer to become electronics manufacturers with the ability to produce products where each is customized.

“In the future, I don’t think you will see places, such as major electronics manufacturing companies, churning out billions of things and dominating the market nearly as often,” Rumpf said. “Instead, you may have thousands of small businesses in the U.S. churning out thousands of products, both mass-produced and customized. Our 3D circuit technology may be the first step to change the paradigm of circuit manufacturing. And it may enable us to exploit and incorporate new physics in traditional planar (2D) circuitry.

For the EM Lab graduate researchers, the effort provided real-world experience in the development of a technology that holds great promise to revolutionize manufacturing of circuits. It is something they credit with spurring them to continue their academic careers past their undergraduate journeys. Their breakthrough also offers the opportunity that a business could be incubated in El Paso to commercialize the EM Lab’s multiple achievements, something that would keep them closer to home.

“I want to stay here in El Paso,” Carranza said. “My whole life is here. I didn’t think UTEP had anything like this. I expected to graduate then go somewhere else. I never thought I was going to be doing research that could literally change the world until I stumbled upon the EM Lab.”

“Four years ago, if you asked me if I wanted to get a Ph.D., I would have said, ‘no,’” Valle said. “Now, I’m close to getting it. I never considered that UTEP had such incredible opportunities for research like what is happening in the EM Lab.”

Rumpf said there is something about his student researchers that elevates the level of work that can be conducted at the EM Lab.

“What we do is extremely difficult and high-risk,” Rumpf said. “EM Lab students spend years just developing the tools they need to do their research. They know when they start their research, they’re probably going to fail many times, because we are pushing ourselves that far. The type of person willing to take on this daunting level of risk and challenge is what UTEP and El Paso have to offer. It’s a personal philosophy, and I don’t think we could have accomplished this any other place but here.” 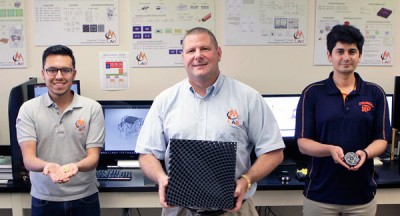