7-Aug-2014 9:10 AM EDT, by University of Texas Health Science Center at Houston
favorite_border 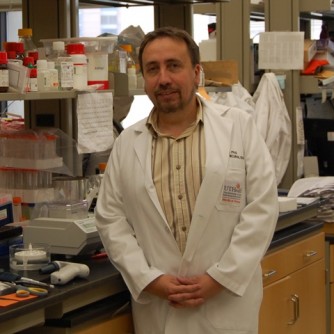 Claudio Soto, Ph.D., in one of his labs at The University of Texas Health Science Center at Houston (UTHealth)

Newswise — HOUSTON – (August 7, 2014) – The misfolded and infectious prion protein that is a marker for variant Creutzfeldt-Jakob disease – linked to the consumption of infected cattle meat – has been detected in the urine of patients with the disease by researchers at The University of Texas Health Science Center at Houston (UTHealth) Medical School.

The results of the international study, led by Claudio Soto, Ph.D., professor of neurology at the UTHealth Medical School, will be published in the Aug. 7 issue of the New England Journal of Medicine.

Variant Creutzfeldt-Jakob disease in humans and bovine spongiform encephalopathy in animals – also known as Mad Cow disease – are fatal neurodegenerative disorders. There are currently no noninvasive tools available to diagnose the disease and there are no treatments.

Sporadic Creutzfeldt-Jakob disease occurs worldwide at a rate of around 1 new case per million people per year. The variant form is a new disease occurring in people who either ate the beef of cows with bovine spongiform encephalopathy or, in the case of three patients in the United Kingdom, received blood transfusions from asymptomatic infected donors.

“What could be less invasive than detecting this disease in urine? The fact that we were able to detect just the variant Creutzfeldt-Jakob disease form in the urine is very important. This could lead to the development of commercial technology for diagnosis as well as to determine the safety of donated blood and urinary products,” said Soto, who is the director of The George and Cynthia Mitchell Center for Research in Alzheimer’s disease and Related Brain Disorders, and founder of Amprion Inc, a biotech company developing the cyclic amplification technology for commercial application.

First author is Fabio Moda, Ph.D., who was a post-doctoral fellow in Soto’s lab at the UTHealth Medical School and is now with the Istituto Neurologico Carlo Besta in Milan.

The research was supported by grants from the National Institutes of Health (P01AI077774, R42NS079060, R01NS049173 and R01NS078745 to Soto); PrioNet Canada and Merck Serono (to Soto); the Italian Ministry of Health, Associazione Italniana Encfalopatie da Prioni and Minesterio dell’Universita e della Ricerca (to Tagliavini); the Charles S. Britton Fund (to Gambetti) and the U.K Department of Health and Scottish Government (to Ironside and Knight).